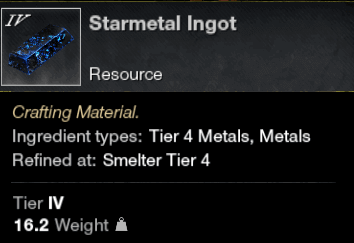 Starmetal Ingot is a processed Tier 4 resource in New World, created mainly from Starmetal Ore and a few other resources.

This is one of the more valuable resources that you can find in the game and it also has the same bluish glow which can be seen on Starmetal Ore and veins.

Some of the rarer equipment such as weapons and armor can be crafted with this resource, mainly Starmetal equipment.

How To Make Starmetal Ingot?

Starmetal Ingot will require more than simply Starmetal Ore, it requires the following resources to be created:

Once you have obtained Starmetal Ingots, you will be able to craft the different types of Starmetal equipment.

The items that can be crafted with Starmetal Ingot are the following:

There are different kinds of equipment that can be crafted with Starmetal Ingots along with other required ingredients that can bolster your Gear Score.

Most Starmetal equipment can provide a potential Gear Score between 380 to 400 per piece, providing better stats as they will be Tier 4 gear.

While Starmetal Ingots may take some time to craft due to the other resources and vast amounts of ore required, farming for these and crafting them will come in handy later on.

You may need to level up your Smelting as well as other Trade Skills if you want to successfully use Starmetal Ingots to craft gear.