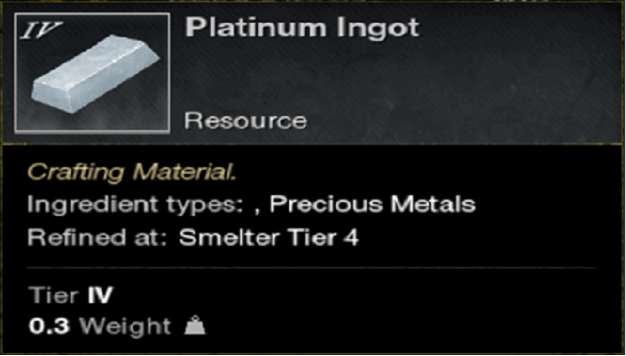 Platinum Ingot is one of the higher-tier (Tier 4) crafting materials that you can make in the game to craft better equipment.

While this is not as easy to access during the earlier phases of the game, you can enough ore a substantial amount later on when you can handle the more dangerous territories.

Some of the better Tier 4 equipment can later be crafted with Platinum Ingot once you have gained higher levels in Weaponsmithing and more.

How To Make Platinum Ingot?

Platinum ingot requires you to be at least Level 100 in Smelting and this will allow you to begin smelting Platinum ore into it.

Unlike the other types of ingots in the game, you will need additional resources aside from just Platinum Ore if you wish to make Platinum Ingots.

The following are the required resources to craft a Platinum Ingot:

Aside from smelting Platinum Ore into Platinum Ingots, you can also obtain them by a rare chance when you open treasure chests.

Getting Platinum Ingots from treasure chests, however, is not the best way to go and you can easily get a good amount if you farm Platinum Veins and the other materials needed.

Platinum Ingots can be used along with other materials to create Tier 4 equipment which is much stronger than the early game ones you will have.

The items that can be crafted with Platinum Ingot are the following:

Platinum Ingot alone is sometimes hard to obtain during the earlier phases of the game but with a few good spots and constant visiting to them, you can get just enough for what you need.

The key to getting enough Platinum Ingot is making sure you have not only Platinum Ore but Gold Ingots as well and acceptable types of flux.

Once you have a good amount of Platinum Ingot at your disposal, you can craft some of the better equipment that will help you face tougher foes.