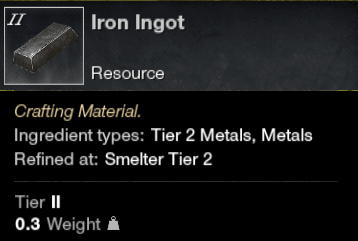 Iron Ingot is an early-game Tier II resource that is required to craft several kinds of equipment in New World, mostly the lower-tier ones that players can equip early on.

This resource can easily be obtained very early in the game as soon as you have a Pickaxe for mining and access to a Smelter.

Having an abundant supply of Iron Ingots will allow players not only to craft early-game equipment but also provides more benefits for later on.

How To Make Iron Ingot?

Each Iron Ingot that you craft will require that you smelt 4x Iron Ore per piece and to craft them, you will need a Tier 2 Smelter.

Once you have obtained Iron Ingots, you will be able to craft the different types of Iron equipment and is even another ingredient required to make Steel Ingots.

The items that can be crafted with Iron Ingot are the following:

There are possibly more items that may be crafted with Iron Ingots, but these are the more common ones, proving that this resource is common yet important to farm for.

Iron Ingots can easily be farmed by focusing on mining the many Iron Ore veins that can be found all around Aeternum.

If you plan on focusing on crafting gear for later on, you will first need to increase the crafting levels depending on which gear you will want to focus on.

Having an abundant supply of Iron Ingots will not only allow you to craft gear that you need to progress, but it also will help with increasing your crafting levels.