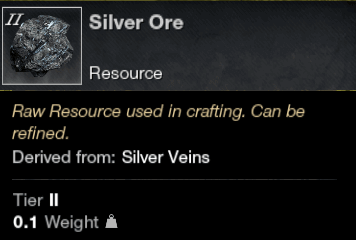 Silver Ore is a Tier 2 resource that can be mined from Silver Veins and is mainly used to craft Silver Ingots for Jewelcrafting.

With this resource, players can craft a ton of items needed for making accessories in New World, which further improve your gear score and stats.

There are even more uses for Silver Ingots which make it a requirement for other resources, making it valuable to have abundant stocks of it.

How To Farm Silver Ore?

Silver Ore appears as normal boulders but has a very visible mixture of Silver, making it easy to identify the Silver Veins.

To mine Silver Ore, you will need to use a Pickaxe and have at least a mining level of 10 and later on, you can track them with a Mining level of 35.

This resource may take longer to harvest than Tier 1 mined resources and will easily be mined with better Pickaxes.

Silver Veins are not as common as Iron Veins or other veins that you may find in New World but that does not mean there are not many of them around.

You can often find it in mountainous areas or even hidden in dangerous caves, rare among other resources that can be mined in Aeternum.

Some notable places are:

Most of the Silver Veins in these areas will likely be located within a cave or on top of a mountain or hill, but they are not that hard to spot.

Silver Ore is required to make Silver Ingots, which mainly are used to craft requirements for Jewelry along with other resources.

The Silver Ingots crafted with Silver Ore are also used to make other kinds of ingots such as Gold Ingots which lead to Platinum Ingots as well.

A large supply of Silver Ore is needed if you are to make Gold Ingots or Platinum Ingots as these resources are all connected.

Silver Ore may not appear to be one of the most valued resources at first as players do not notice what they are needed for when they start.

As you progress in the game, you will realize that other resources require Silver Ingots and this leads to the need for a lot of Silver Ore.

Focusing on crafts such as jewelry and others which require Silver Ingots, Gold Ingots, and Platinum Ingots will have you searching for a lot of Silver Ore.