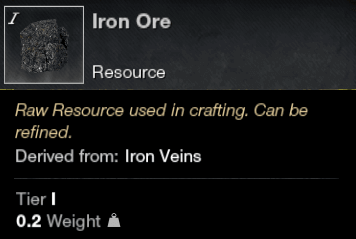 One of the earlier resources that you can obtain via mining is Iron Ore, a Tier 1 ore which can be used to craft Iron Ingots.

The Iron Ingots that you create with Iron Ore can, later on, be used to craft different kinds of weapons, armor, and more.

You can often farm Iron Ore early on when you start out playing New World as it is one of the most common resources you can mine.

How To Farm Iron Ore?

Farming Iron Ore is quite simple, you simply need to have a Pickaxe of any kind and will need to search for Iron Veins to mine.

Iron Veins can be mined with any mining level and can be tracked once your mining level reaches 25 and above.

You will mostly find Iron veins in groups of three along hills and mountains, a bigger chance to spot them if you travel to higher areas.

Iron veins can be determined by their similarity to boulders but with a brownish or yellowish color mixed with the natural rock color.

Several locations in Aeternum have loads of Iron veins, mainly the mountainous areas and other forests in higher areas.

Some notable places are:

While there are several areas to farm Iron Ore, the above mentioned are some of the more common spots to find several Iron veins to farm.

Iron Ore is processed in a Smelter to craft Iron Ingots, a Tier I resource which can be used to craft Iron equipment such as weapons, armor, and tools.

This is an early game resource that is needed by most players who tend to craft their gear and it plays a big role in leveling up your other trade skills.

By starting with Iron Ore and Iron Ingots, you can work your way up to higher crafting levels to use more equipment at higher levels.

Iron Ore is mostly one of the most farmed resources not only because it is good for crafting newer lower-tier gear, but it also has other benefits.

The Iron Ingots you craft, later on, are also needed for creating other resources, such as Steel Ingots, requiring several materials including the Iron Ingots.

A lot of crafting levels in your Trade Skills require Iron Ingots for mass crafting, allowing you to level them up easily if you have an abundant supply of them.

The more Iron Ore you have, the better your supply of Iron Ingots you will have available for crafting later on.