While the news of the Lucent Hive enemies is troubling Ikora, you will need to first investigate the strange fragment that you have found.

You will need to visit the Pyramid Relic and figure out how the fragment may be of use, allowing you to get your hands on a new piece of equipment if done right.

This quest will act as an introduction to equipment crafting via the relic pyramid, which may come in handy later on as you progress. 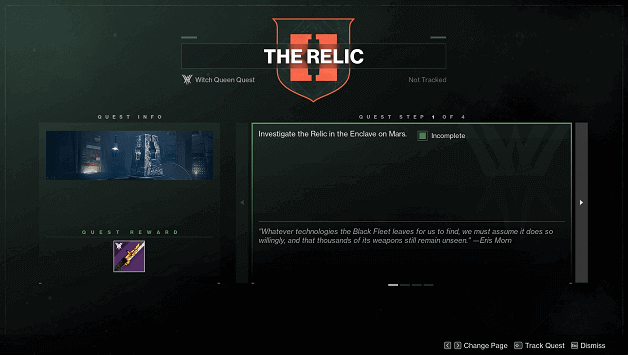 Step 1) Investigate the Relic in the Enclave on Mars

Head to the Pyramid Relic located at the Enclave on Mars and interact with it to start your first equipment crafting.

Using the artifact that you obtained from Savathun’s ship, you will need to create a new weapon using the Pyramid Relic, begin by accessing it.

This is the process of choosing which perks/traits you will have for the weapon and you will need to pick them out before crafting it.

Once ready, begin the crafting.

Step 4) Access The Conduit on the of the Relic

Head to the side of the Pyramid Relic and interact with it, which will allow you to complete this quest as well as gain access to The Witch Queen Quest.

Completing this quest will provide you with your first Legendary Glaive weapon which you can immediately use after crafting.

You will also obtain the quest called The Witch Queen that you can carry out right away after acquiring it.

Also read below how to get the Glaive weapons 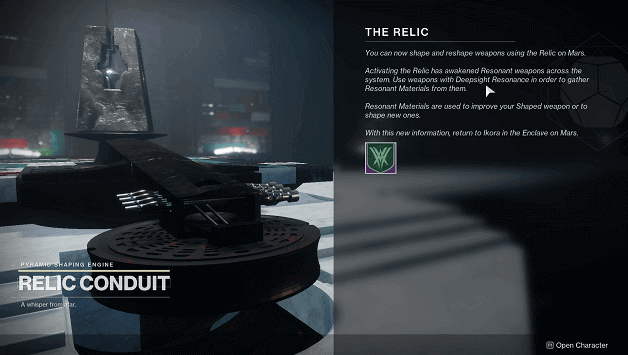 After learning how to use the Relic to craft, you will be able to do so in the future when you obtain more fragments.

This will allow you to craft different equipment that you can strategically use based on your builds as you see fit.

Completing this quest will allow you to proceed with the campaign, obtaining The Witch Queen as your next quest.