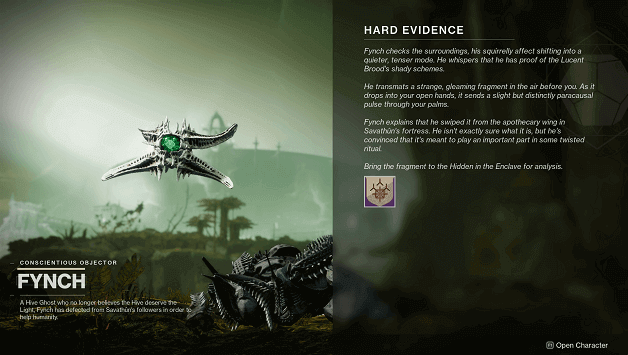 The Hard Evidence quest is part of the Rising Tensions quest and can be completed separately before proceeding with it.

This quest serves as an introduction to the Evidence Board, which is the hub for intel on any and all Enclave investigations.

Later on, this allows you to take on investigations that you uncover as you progress through The Witch Queen campaign. 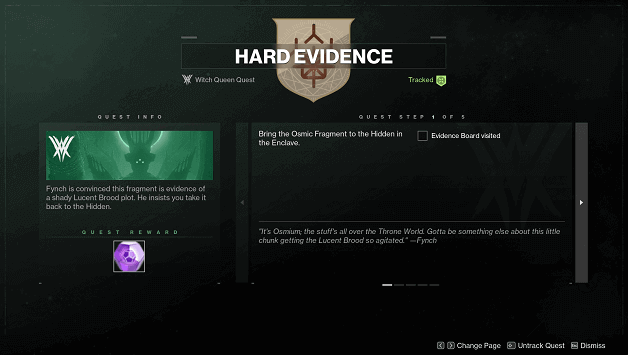 You will have obtained an Osmic Fragment from a previous quest and will need to head to the Evidence Board at The Enclave.

You will have obtained an Osmic Fragment from a previous quest and will need to head to the Evidence Board at The Enclave.

From The Enclave, you will be able to fast travel to Quagmire and follow a waypoint leading to the area you will investigate.

The object will be visible as a crystal-like item with which you will be able to interact, which how to get the Osmic Fragment.

Groups of Hive enemies will appear and begin to attack you, requiring that you clear them out before you can proceed to the next step.

During this fight, other players may help you if you are under attack simply by being in the area at the same time as you.

Head back to The Enclave and make your way to the Evidence Board so you can log the Osmic Fragment, completing this step.

This will be similar to reporting your finding while we’re investigating and will later contribute to future quests from the Evidence Board.

After you have logged the Osmic Fragment, you can complete the quest by interacting with the Evidence Board again.

Collect the Legendary Engram to complete the quest.

Completing this quest rewards you with a Legendary Engram and this will unlock your access to the Evidence Board for future quests.

As you progress through The Witch Queen Campaign, you will be able to unlock more quests from the Evidence Board, including an Exotic Quest to get your Exotic Glaive Pattern. 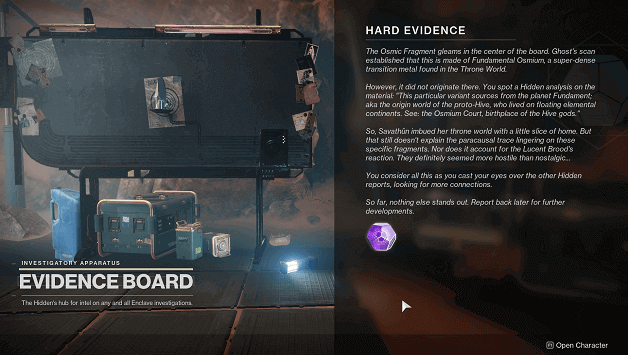 The Evidence Board may not look like much at first but it becomes more rewarding later on when you have progressed through the campaign.

You can do this quest on your own but you may get help in Quagmire when you are ambushed.

Be careful of other enemies in the area as they can disrupt your quest progress by blocking off your path to the Osmic Fragment.