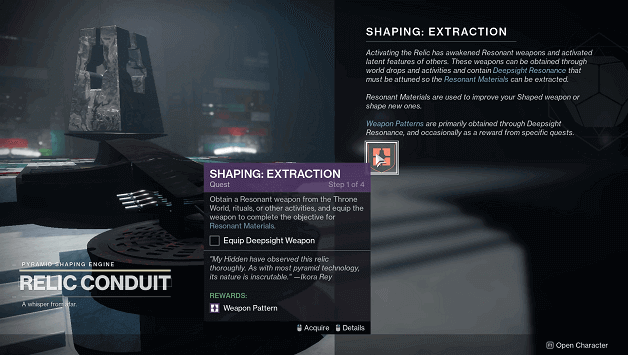 The Shaping: Extraction quest is an introductory quest to the Deepsight Resonance of weapons as well as Resonant Materials.

It will teach you the basics of how to unlock a weapon’s Pattern as well as obtain Resonant Elements which are needed for crafting.

This whole quest is tied with crafting, unlocking Patterns from weapons, and obtaining the materials needed for crafting.

How To Get Shaping Extraction Quest?

The Shaping: Extraction quest is obtained from the Relic conduit and is available right after you finish The Relic quest.

This mission is unlocked along with the introductory The Witch Queen quest (not to be confused with the campaign). 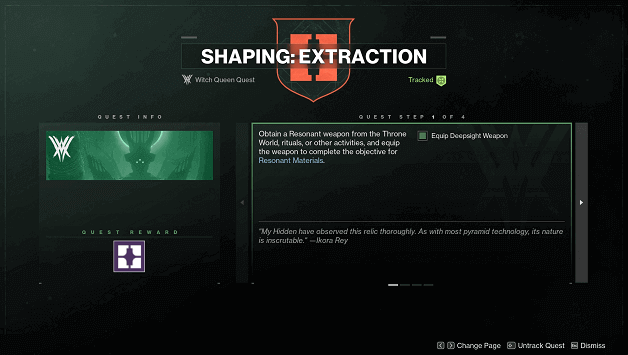 The first thing you will need to do is to equip a Resonant weapon that comes from the Throne World, rituals, or other activities.

You will need to equip this weapon which you should have by the time you obtain the Shaping: Extraction quest.

You will need to complete the weapon objective of your Resonant Weapon which will allow you to unlock its Pattern and Resonant Elements.

The Resonant Weapon objective can be checked by viewing the weapon’s tooltip.

This can be done by viewing the weapon and selecting the Deepsight Resonance which will now have the option to claim the Resonant Elements.

This will also unlock the Pattern for the weapon you have just extracted Resonant Elements from, allowing you to shape it at the Relic in the Enclave.

Step 4) Return to the Relic Conduit in the Enclave

You will need to head to the Relic, which is located in the Enclave to obtain Resonant Alloy as a reward, ending the quest in the process.

After you have completed the Shaping: Extraction quest, you will have already obtained Resonant Alloy and the weapon Pattern of your Resonant Weapon that you unlocked. 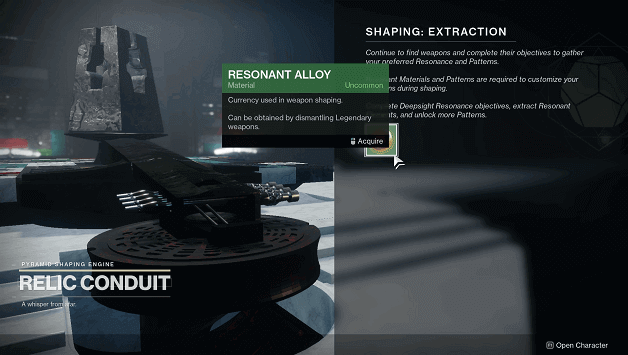 Now that you have learned how to extract Resonant Elements and obtain Patterns, you can start getting more with newer weapons.

This quest served mainly as an introduction to teach players how to prepare for weapons crafting with Patterns for weapons and Resonant Elements for crafting them.

You can continue to do the activities from this quest to increase your arsenal to have even more weapons with your customizations.