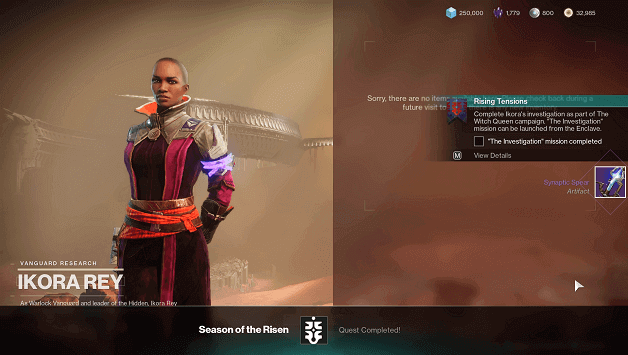 After doing some investigating and meeting a ghost named Fynch who no longer wants to be a part of Savathun’s army, you are needed back at the Tower.

An issue has occurred as Empress Caiatl is displeased with the fact that Guardians fought against the Cabal on strange terms.

You will need to see how negotiations go and will be put to the task which requires both the Vanguard and Cabal to team up with.

How To Get Rising Tensions Quest?

The Rising Tensions quest is obtained during the early phase of The Witch Queen DLC and is obtained when you take the Synaptic Spear from Ikora.

You obtain the Synaptic Spear from Ikora as you start with the introductory 3-step Witch Queen quest. (Not to be confused with the main one) 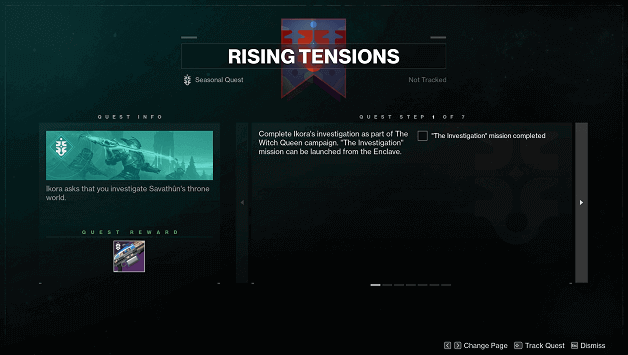 You will need to complete Ikora’s investigation as part of The Witch Queen campaign. This mission can be started from the Enclave.

To know more about the mission, check out our The Investigation Mission Walkthrough.

Following the events of The Investigation mission, you will find the location of a ghost named Fynch, with whom you will need to interact.

Obtain the “Hard Evidence quest” from him to proceed to step 3.

Step 3) Meet with the Vanguard

You have found information Ikora has asked for and may continue to fight against Savathun or meet with the Vanguard and Empress Caiatl.

Head over to the Tower and go to the hangar where a meeting will be held.

Empress Caiatl and Lord Saladin wish to speak with you further at the War Table, which can be accessed at the H.E.L.M.

Fast travel to the H.E.L.M. and interact with the War Table to begin the conversation.

After speaking with Caiatl, Lord Saladin will need to speak to you regarding a new threat and will assign you to take matters into your own hands.

This acts as your first PsiOps mission which takes place in the EDZ, where you will fight through the activity and secure a Hive Lieutenant.

You will be joined by other players during this activity.

Head back to the War Table at the H.E.L.M. and interact with the War Table to speak with Lord Saladin, who will offer you a reward.

Completing the Rising Tensions Quest will reward you with the Recurrent Impact Legendary Machine Gun.

Lord Saladin will offer you the Operation Elbrus seasonal quest after a short dialogue. 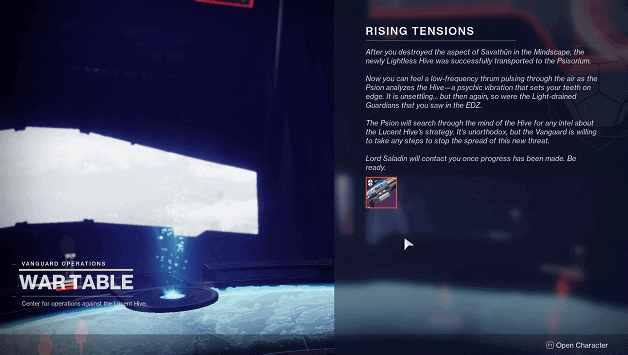 You have successfully used the Synaptic Spear to secure a Hive Lieutenant and it appears this is a way for taking back the Light.

Lord Saladin will contact you soon on your next steps which will put you even deeper into the whole conflict as you fight against Savathun and attempt to stop her plans.

After this quest, you should be able to do PsiOps Battleground missions once they have been unlocked and can get good rewards and experience from them.