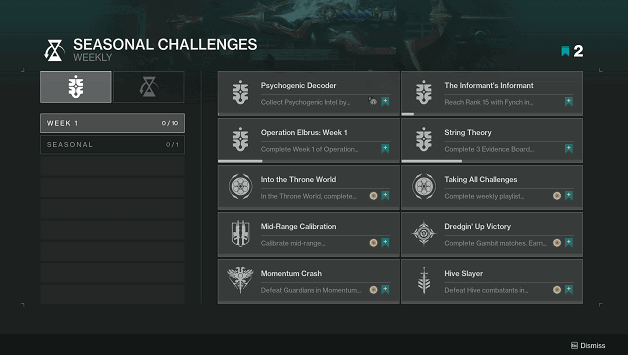 With the arrival of The Witch Queen DLC, the Season of the Risen has begun and now the Seasonal Challenges are once again available.

By completing the seasonal challenges, you can gain a lot of rewards such as loot, insight, bright dust and challenger experience.

You can quickly increase your Season of the Risen rank by completing the available Seasonal Challenges available as well as the ones added weekly.

Into the Throne World

Complete 3 Evidence Board investigations in the Mars Enclave

Complete all of the Season of the Risen Seasonal Challenges.

Season of the Risen Rank Bonuses

The following are the Season of the Risen Rank Bonuses that you obtain as you get higher ranks during the season.

Increases the currency drops from various sources at Ranks 3 and 20.

Provides objective acceleration to their respective quests at Ranks 11 and 22.

Theses bonuses grant a chance for an additional piece of seasonal gear to drop in various activities at Ranks 43, 71 and 81.

Grants varied boosts unique to Season of the Risen at Ranks 12 and 32.

It is a good idea to complete as many seasonal challenges you can as possible once you have done the current quests and missions for the DLC.

The Witch Queen has a lot of new things in store but at one point you will have enough time to do the seasonal challenges.

Completing the seasonal challenges will offer you more than just Insight, Bonus Gear, Challenger XP and Bright Dust, there are more benefits.