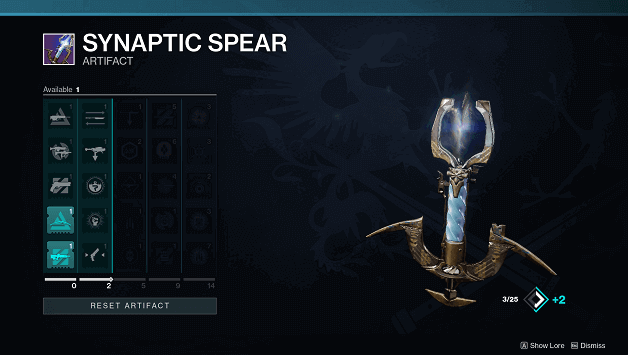 A light aligned with the psychic plane, capable of dispelling light.

The Witch Queen DLC has started us off with Season of the Risen and the artifact seems to be a magical object known as the Synaptic Spear.

Like other artifacts, the Synaptic Spear provides players with additional mods to use as well as a boost in their Power Score.

The Synaptic Spear is the key to separating the Light from Hive enemies and will be a necessary tool when going against Savathun.

How To Get The Synaptic Spear?

The Synaptic Spear is obtained as you progress through the introduction of The Witch Queen where you eventually obtain it after infiltrating Savathun’s throne world.

Although you are left in the middle of nowhere, you still survive and obtain the Synaptic Spear and will be able to use it from then on.

You will need to get The Witch Queen DLC to fully enjoy its benefits and may not obtain it at all without purchasing it for its content.

How To Level Up Synaptic Spear?

You may level up the Synaptic Spear by gaining XP and this will provide you with the bonuses as the artifact gains levels.

Gaining experience will provide you with a Power Bonus and Artifact Unlock, which separately are obtained depending on your XP.

This can easily be leveled up by completing activities, killing enemies, and taking on seasonal challenges during Season 16.

Season of The Risen Artifact Mods

Each time you level up your Season of the Risen Artifact, you will gain a point that you can place into mods when previewing your Artifact.

Placing a point will allow you to craft the mod and equip it into a specific piece of gear, granting you better passives.

You will unlock a new set of mods after obtaining a certain amount of Artifact Mods, unlocking a new tier for each set.

The following are the tiers and mods of the Season of the Risen artifact.

There are many benefits of leveling up the Synaptic Spear and a lot of mods useful for the newly added Glaive weapon.

Leveling up the Synaptic Spear will allow you to gain more bonuses that you can use to improve your builds with your equipment.

The more XP you gain while playing through the game, the faster you will level up the Synaptic Spear and the sooner you get to use its mods.