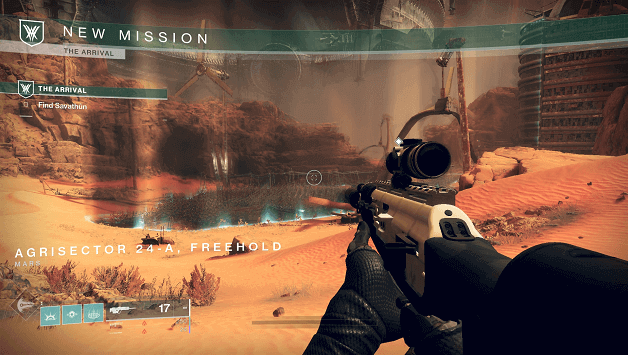 Savathun arrives as Mars has appeared once again and Guardian finds themselves exploring the area they head towards the large ship.

It is believed that the reappearance of Mars has drawn Savathun out of hiding and intel believes that she is in a weakened state.

Since the Cabal has blocked flight paths to the ship, you will need to find your way through the Cabal and infiltrate Savathuns ship to hunt her down. 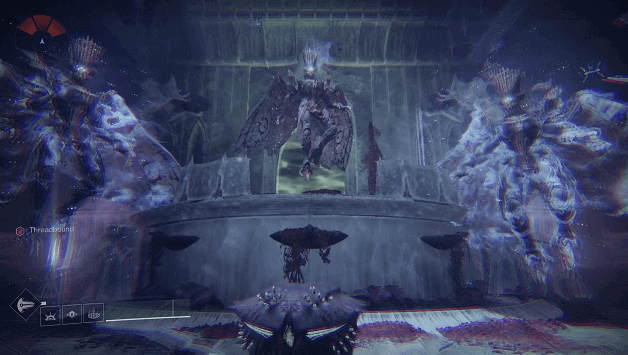 You will find yourself starting on near what Ghost describes as a strange crop field located on Mars in Agri Sector 24-A Freehold.

Mars appears to be having temporal abilities which is why you are seeing fragments from what is explained to be the Golden Age.

You will need to make your way towards Savathun’s ship and this will be done by fighting past Cabal forces.

After passing through the crop field, you will find several Cabal troops positioned near a Launcher which you will need to power.

One of the enemies will drop a Fuel Canister which you will need to pick up and bring to the Launcher to power it up.

When the Launcher is powered on, head through it and you will be propelled over a large cliff where the Cabal will be setting up a giant cannon.

3) Find a Way onto Savathun’s Ship

Ghost gets an idea when he sees the ship and instructs you to get him to a console located on the inside of the Cabal structure.

Follow the waypoint that leads you to the console and Hack it once you are within range but are ready to fight off Cabal forces.

Now that Ghost has extracted information, he knows how to get the cannon working, requiring that you obtain fuel, power and he accesses projectile control. (You are the projectile of course)

You will need to go to the fuel lines to fight off Cabal enemies and hunt down the Imperial Mechanics who have large wrenches that you will need to open the lines.

Defeat the mechanics and use the large wrenches on the marked locations (need to do this twice) and the fuel lines will be opened.

Follow the waypoint and fight your way past more of the Cabal forces and you will find yourself in at the generators.

Fight your way past the enemies inside and take out the Imperial Technicians inside, who will drop Fusion Cells that you will need to place into the Generators. (done twice also)

After powering the generators, make your way towards the control room which is marked by a waypoint leading to a small descent.

You will have to make your way past the rotating parts by jumping to the sides, eventually leading you to the control room.

The next area will require that you obtain two Override Codes to get the lift moving and you will need to fight the Cabal and defeat Imperial Engineers to get them.

Get to the marked console once you have both Override Codes and interact with it, which has Ghost turn of a lift and summon a loot chest as well.

Fight through the enemies and head over to the control panel to adjust the cannon trajectory, which leads you to follow the waypoint into the cannon chamber.

You will fight your way heading into the barrel of the cannon and will be launched to Savathun’s ship, landing at the entrance.

Make your way into the ship and follow the waypoint that leads you inside and make sure you have the proper gear equipped because you will be going up against tough enemies soon.

Ghost will notice traces of Void Light, which hints that perhaps another Guardian arrived and has taken out the now lifeless Cabal in the area.

You are requested to head back but there may be no other opportunity, which leads you to push forward into the ship.

Following the waypoint leading into the ship, you will have to jump from a bridge to a small entrance and up a flowing water system.

Continue fighting your way past enemies where you will notice strange signs of Light that the Ghost finds disturbing.

As you continue making your way through the ship, you will encounter Hive enemies and one of them will drop Tribute.

You will need to collect 5 Tributes in total by defeating enemies and bringing them to a marked location in small amounts.

Once you have brought all Tribute to the marked location, a locked path will open up and another loot chest will appear with rewards.

Follow the waypoint once again and there will be a bridge that leads to enemies guarding an entrance, you will need to take them out and take a different path to get past a gate.

You will see areas above where you can jump and your waypoint will lead you through them so that you can jump over a locked gate. (watch out for exploding moths! Shoot them!)

Once you are over the gate, head over to the strange statue and investigate it, you will need to pick up the fragment.

When you pick up the fragment, you will obtain the Artifact of the Black Fleet, which will be the new Artifact in the DLC.

After you obtain the artifact, you will be attacked by Hive enemies and will need to defend yourself until the waves are cleared.

You can get through the top of a sealed door which will be marked by a waypoint, just jump up to the gap and go through.

Continue following the waypoint once more and you will be led to the inner part of the ship, fighting your way through enemies along the way.

Make your way to the inner parts of the ship and there will be a glowing hole which you will then need to jump into.

Continue exploring the ship until you find yourself in an open area where Savathun escapes, leaving you by closing a portal where you then need to defeat waves of enemies.

During the fight, you will encounter a Hive enemy who has its Ghost and will resurrect, which requires you to interact with its Ghost when killed to smash it.

Enemies will start to attack you and through the course of the fight, you will need to collect a total of 3 Tributes and bring it to the marked area.

Once you bring all of the Tribute to the marked area, all other enemies will disappear and a loot chest will appear, while a portal opens up as well.

Go through the portal and fight your way further into their ship, which appears like a whole new world from its appearance and architecture.

After fighting your way through enemies, head into the next room where Savathun will be and you will need to defeat her minions.

Savathun will join the fight and you will be able to damage her but beware as she will spawn more minions.

Continue fighting against Savathun and her minions until you completely deplete her health, making it appear as if she is beaten.

Another loot chest will appear but Ghost thinks that the fight was too easy even for a strong Guardian like you.

Approach the chest and you will be trapped, Savathun will appear and your vision will fade to black, opening a cutscene.

You will wake up back on Mars as it appears that Savathun has tossed you out, Ghost reports the incident with the Hive enemy’s Ghost.

The mission ends with a summary of what has happened to keep you updated on the events and you then continue in The Enclave on Mars.

Through the mission, you will have obtained different loot from the multiple loot boxes that appear as you move past certain objectives.

You will also receive weapons that can be used to upgrade your current arsenal to improve your Power Score during or after the mission. 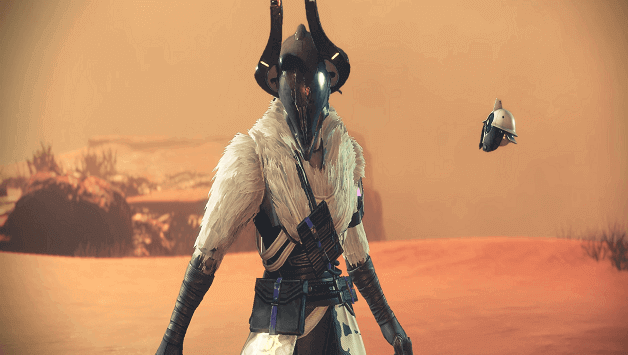 Savathun has indeed returned and she is a trickster that everyone thinks she is, but there is more than meets the eye.

Strangely you have encountered a Hive enemy with a Ghost of its own, which may mean that Savathun has stolen the Light.

You have survived the encounter with Savathun and now need to continue investigating after reporting back to The Enclave.