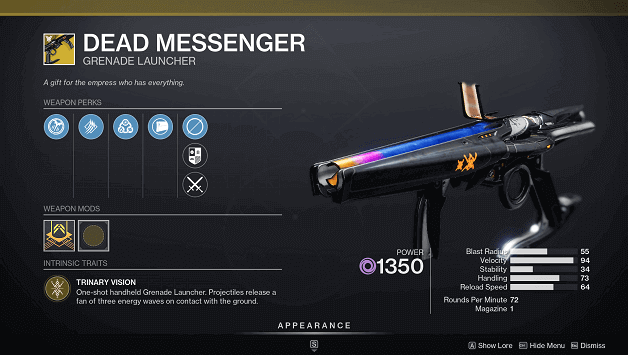 A gift for the empress who has everything.

The Dead Messenger is an Exotic Grenade Launcher that was desired by Empress Caiatl for its ability to splatter things.

This Exotic Grenade Launcher is capable of firing 72 rounds per minute and holds a single shot in its magazine.

Its ability to split its projectiles on contact into multiple waves works excellently when it comes to killing several enemies at once.

How To Get Dead Messenger?

The Dead Messenger can be obtained after completing the few different exotic quests like Rising Tensions, Operation Elbrus, Kill the Messenger & Vox Obscura.

1) First you need to complete Season of the Risen quest (Rising Tensions). You should talk to Ikora Rey on the Enclave to get this Rising Tensions quest.

2) By completing the Rising Tensions quest you will get access to the next quest called Operation Elbrus from The War Table. There are totally 28 steps in this quest but you don’t need to do all of them. By just completing the certain part of the quest you will listen to debriefing by Lord Saladin and after accepting that you will get access to the next exotic quest called Kill the Messenger.

3) In Kill the Messenger the objective of the quest is to go to the Throne world destination in the Director and launch “Vox Obscura” exotic quest on normal difficulty. To do this quest the recommended power is 1550. At the end of  Vox Obscura exotic quest you get access to the Dead Messenger from the chest.

Dead Messenger has a barrel that provides faster projectiles and much faster aiming.

Dead Messenger’s damage type can be changed by pressing reload to cycle between Solar, Arc, and Void.

This weapon is especially easy to grip.

This makes the Dead Messenger deal even more damage as the energy waves come in contact with enemies.

This can be very useful for clearing out waves of enemies that are charging towards you or blocking your path.

How to Get Dead Messenger Catalyst?

This part of the content is missing but will be updated as soon as possible.

With the Dead Messenger’s ability to create energy waves on impact, its usage of The Fundamentals perk can be a big help depending on the enemies you face.

You can change the damage type that this Exotic Rocket Launcher deals, which can deal increased damage against certain enemies or cause elemental effects.

The Dead Messenger provides you with two sources of damage, once from the initial impact and the rest from the split energy waves.