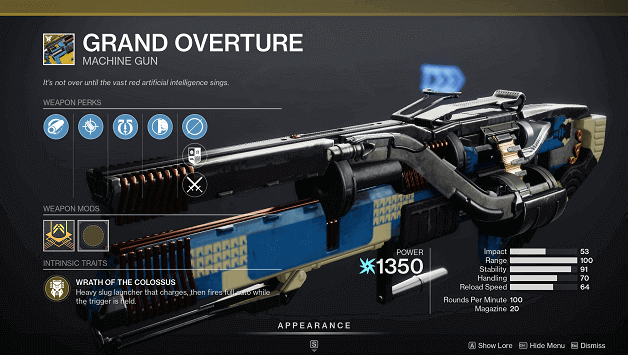 It’s not over until the vast red artificial intelligence sings.

The Grand Overture is a tactical Machine Gun capable of firing slugs at full auto and unleashing missiles to destroy enemies.

This Exotic Machine Gun is capable of firing 100 rounds per minute and has a magazine limited to 20 shots before reloading.

Grand Overture can deal high amounts of damage because it fires slugs and with the addition of missiles, you can shred and blow up enemies in seconds.

How To Get Grand Overture?

The Grand Overture is the seasonal weapon of Season of the Seraph and is obtained by players when they reach a rank 35.

Players who have purchased the Season Pass will be able to obtain it at rank 1, allowing them to use the Exotic Machine Gun right away.

You can get the Grand Overture Exotic Ornament by reaching rank 100 if you have purchased the season pass.

Land hits with the slug launcher to load missiles, Press reload and then fire to launch all missiles in a single volley.

This weapon is especially easy to grip.

Wrath of the Colossus

Heavy slug launcher that charges, then fires full auto while the trigger is held, allowing the Exotic Machine Gun to windup and unleash hell.

This can provide Grand Overture with an additional way to cause mayhem, thanks to Omega Strike unleashing missiles to deal massive damage.

You can constantly fire at enemies and unleash missiles as a combination of two damage sources for a high amount of damage per second.

How to Get Grand Overture Catalyst?

By talking with Banshee-44 in the Tower you can get the quest called “Heavy Does It”. By completing this quest you can unlock the Grand Overture Catalyst at the end of it.

“Heavy Does It” totally involves 3 quest steps and upon completion of these quest steps you can unlock the catalyst.

It’s a good strategy to continuously fire the Grand Overture but to do so with accuracy as the missiles being loaded require that you hit with the slugs.

As you fire slugs, you can combine the missiles for even more damage and fire in a pattern to ensure missiles are always available.

This Exotic Machine Gun is more like an automatic shotgun, capable of blasting holes through enemies like a walk in the park.