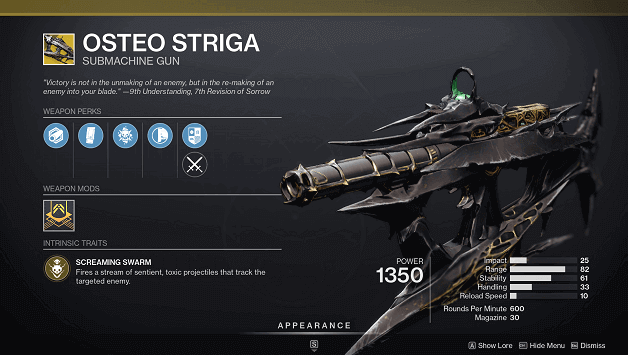 Small in size but with a deadly sting, the Osteo Striga is an Exotic Submachine Gun that is capable of poisoning your enemies.

This Exotic Submachine is capable of firing 600 rounds per minute that can track enemies you are targeting, which can guarantee more hits.

The Osteo Striga is quite capable of taking out multiple enemies in a small amount of time thanks to its toxic bursts.

How To Get Osteo Striga? 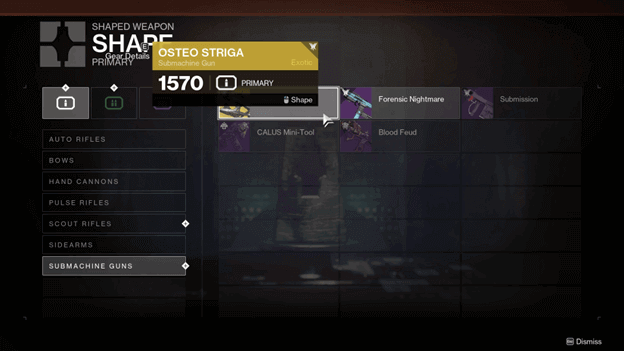 The Osteo Striga can be obtained first by completing The Witch Queen campaign, which rewards you with its Weapon Pattern.

Once you have obtained the Osteo Striga Weapon Pattern, you may head to the Resonance Engine at the Enclave on Mars to shape it.

Since the Osteo Striga can be shaped and reshaped, you can later change its perks to those of your choosing.

The Osteo Striga has a barrel that is optimized for recoil reduction.

Osteo Striga has a greatly increased magazine size but reloads much slower.

Landing a final blow or multiple precision hits triggers a burst that poisons nearby targets.

The Osteo Striga fires a stream of sentient, toxic projectiles that track the targeted enemy, allowing you to easily hit enemies.

With this trait, the Osteo Striga can guarantee more hits even if you are moving since the projectiles will track the enemy if you are aimed at them.

How to Get Osteo Striga Catalyst?

The Osteo Striga Catalyst can be obtained once you reshape the Exotic Submachine Gun, which requires you add it to the weapon’s perks and reshape it.

With the Osteo Striga Catalyst installed on the weapon, it adds 30 to Reload Speed and causes poison final blows to return ammo to the magazine.

This provides you with quicker reloading speed as well as gives you more rounds to fire before reloading when enemies die from the poison final blows of the weapon.

What makes the Osteo Striga unique is its ability to cause toxic bursts around enemies who have been killed or when you land several Precision Hits.

Enemies who are close together are sure to suffer from this weapon, making it easy to take out large numbers in a small amount of time.

The Osteo Striga’s projectiles may be slower than most, but their ability to track enemies makes them very useful in many situations.