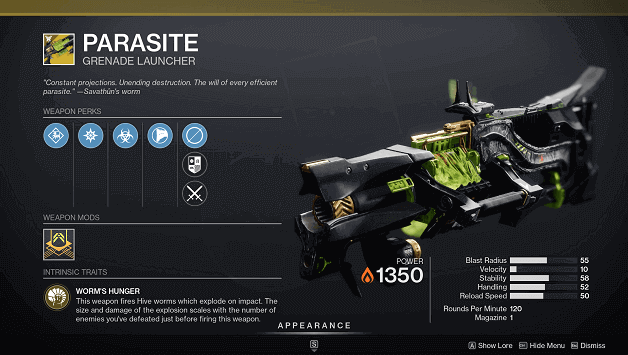 “Constant projections. Unending destruction. The will of every efficient parasite.” –Savathun’s Worm

Parasite is a nasty Exotic Grenade Launcher that fires out Hive worms that explode on impact, damaging enemies with its explosion of guts.

Parasite allows you to buff your weapons with more damage for a short time if you hurt yourself with the worm explosion.

How To Get Parasite?

This part of the content is missing but will be updated as soon as possible.

Parasite is optimized for an especially explosive payload.

Taking damage from your worm projectile detonation empowers your weapons for a short time.

Parasite has a versatile dual-purpose stock.

This weapon fires Hive worms which explode on impact. The size and damage of the explosion scale with the number of enemies you’ve defeated just before firing this weapon.

This makes it even deadlier for you to use if you have killed multiple enemies and with Worm Byproduct, you can easily get more kills with the bonus damage.

It appears that the Parasite has no catalyst slot and it is unsure if this Exotic Grenade Launcher will have one.

While damaging yourself with the worm explosion may not seem like a bright idea, it becomes quite handy especially if your character is built to heal fast.

You can use the buffs at the cost of a bit of health (which you recover anyway) to boost the damage of your weapons and make it easier for you to trigger Worm’s Hunger.

Since you will have more damage, you can kill groups faster, feeding Worm’s Hunger and it goes on and on until you have no more enemies.