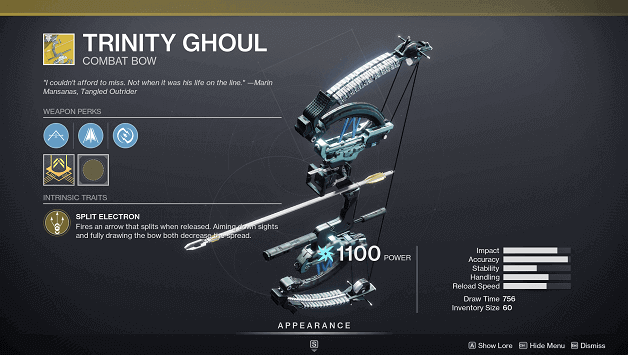 “I couldn’t afford to miss. Not when it was his life on the line.” –Marin Mansanas, Tangled Outrider

The Trinity Ghoul is a shocking Exotic Combat Bow that can call upon lightning to deal damage to unsuspecting enemies.

This Exotic Combat Bow has a draw time of 756 and an inventory size of 60, capable of firing an arrow that splits when released.

Trinity Ghoul can deal extra damage for every shot if it recently gets a precision kill, summoning chain lightning with the next shot.

How To Get Trinity Ghoul?

You may obtain Trinity Ghoul from the following sources:

The Trinity Ghoul is a tightly strung bow.

Fires an arrow that splits when released. Aiming down sights and fully drawing the bow both decrease the spread.

This allows you to fire both split shots as well as focus the spread of the shots to hit enemies with multiple arrows.

Together with the Lightning Rod perk, you can cause the arrows fired to release a chain of lightning when fired after previously scoring a precision kill.

How To Get Trinity Ghoul Catalyst?

This makes it easier to cause chain lightning to occur, allowing you to use it often provided you deal Arc damage final blows.

The Trinity Ghoul rewards its user with additional damage after every kill, triggering the Lightning Rod trait, releasing chain lightning to damage enemies.

With the Forked Lightning perk, Lightning Rod can be triggered often with any type of Arc final damage blows, allowing you to take advantage of the chain lightning attacks.

Combining precision blows and Arc damage using Trinity Ghoul will make short work of enemies that are unlucky enough to get hit.