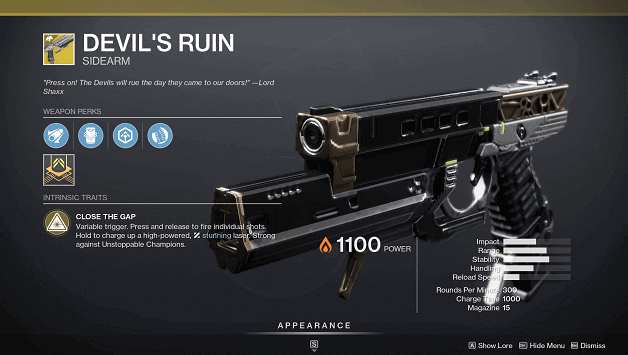 “Press on! The Devils will rue the day they came to our doors!” –Lord Shaxx

The Devil’s Ruin is an Exotic Sidearm that fires fast rounds and also has a variable trigger to release a charged laser.

It is capable of firing 300 rounds per minute and has a charge time of 1000 while having a magazine capacity of 15.

Players can make use of the charged laser to deal more damage and to stun enemies that may be tough to kill.

How To Get Devil’s Ruin?

The Devil’s Ruin was obtainable through a quest called “A Moment In Time” which was available during Season of the Dawn.

You may now obtain Devil’s Ruin by purchasing it from the Monument to Lost Lights which can be found in the City.

The following are needed to purchase Devil’s Ruin:

A weighty barrel extension is fitted on the Devil’s Ruin.

The Devil’s Ruin has distance optimizations.

Fully charging the laser refills the magazine from reserves.

The recoil direction of the Devil’s Ruin is more vertical.

The Devil’s Ruin has a variable trigger that allows you to press and release to fire individual shots or hold to charge a high-powered stunning laser.

The stunning laser is strong against Unstoppable Champions and works well with stunning other enemies that you fight.

The ability to choose which kind of shots you fire can be very handy in certain situations, especially when Unstoppable Champions are present.

There is currently no Devil’s Ruin Catalyst and there is no hint of it being added any time soon for this Exotic Sidearm.

The Devil’s Ruin is a good choice to bring when you will need to kill Unstoppable Champions and the laser is a great addition for stunning enemies.

Enemies can easily be taken out with this weapon and to make things better, fully charging the laser replenishes your ammo, allowing you to continue firing after.

This weapon is great when used strategically, which you can do with another weapon to take advantage of its stunning laser.