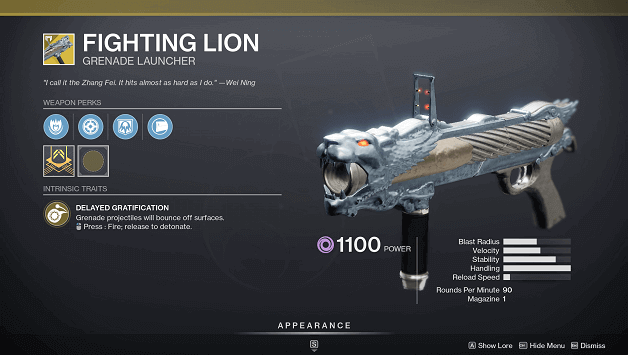 “I call it the Zhang Fei. It hits almost as hard as I do.” –Wei Ning

The Fighting Lion is a tactical Exotic Grenade Launcher, capable of having its grenade projectiles that bounce manually detonated.

With a single round in its magazine, the Fighting Lion is capable of firing up to 90 rounds per minute including reloading times.

One of the best things about the Fighting Lion is that it reloads if you defeat several enemies affected by grenade damage, allowing you to use weapons simultaneously.

How To Get Fighting Lion?

You may obtain Fighting Lion from the following sources:

The Fighting Lion is weighted for vertical recoil.

Fighting Lion projectiles travel faster and have a controlled explosion.

The Fighting Lion is especially easy to grip.

Grenade projectiles will bounce off surfaces and you can control their detonation to time explosions perfectly when they are in close proximity to enemies.

With the ability for the grenade projectiles to bounce, you can easily get enemies behind cover instead of firing a round that explodes on contact.

This makes it easier to get enemies accurately with the grenade projectiles, providing you with the decision of letting them explode on their own or force them to detonate.

You will also be able to trigger the Thin The Herd trait more often if you can perfect the timing of your grenade projectiles.

How to Get Fighting Lion Catalyst?

The Chimera Perk is obtained after you have unlocked the Fighting Lion Catalyst, which provides your Kinetic and Power weapons with increased handling and accuracy after firing.

This will work well with Thin The Herd as there will be several enemies affected by grenade damage which allows you to reload Fighting Lion’s magazine when killing them.

The Fighting Lion catalyst is obtained by defeating non-Guardian enemies that can be found anywhere in the system.

You can upgrade Fighting Lion by unlocking its catalyst after you have defeated 1000 enemies with Fighting Lion and have completed 2500 bounties.

The tendency most of the time when it comes to grenade launchers is that after you fire one round you usually switch to another weapon to deal damage to avoid reload times.

With the Fighting Lion, you can fire a grenade and detonate it to make enemies affected by grenade damage which allows you to trigger Thin The Herd by killing surviving enemies.

This works well either way since enemies directly hit will take more damage and enemies killed will cause the Exotic Grenade Launcher to reload.