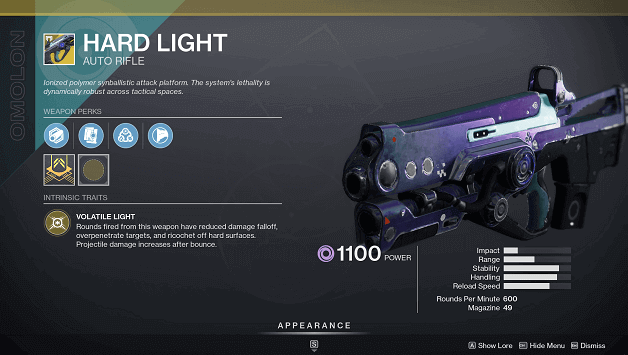 Hard Light is an Exotic Auto Rifle that is widely known for its ricocheting projectiles and ability to change its damage type.

This Exotic Auto Rifle is capable of firing up to 600 rounds per minute and has a magazine that holds up to 49 rounds.

With the ability to change damage types, the Hard Light can be used to deal extra damage to certain enemies and cause certain effects.

How To Get Hard Light?

Hard Light can be found in multiple ways but the most common is from Exotic Engrams as well as Legendary Engrams.

These can be found by defeating random enemies or by opening loot crates or being purchased from vendors.

It is possible to obtain Hard Light out in the open as a PVE drop when roaming different locations.

The Hard Light has a barrel that is optimized for recoil reduction.

This makes it easier for you to hit more enemies and you can also increase damage by ricocheting bullets to hit enemies.

Using Hard Light can make it easy to eliminate several enemies, especially in tight areas or when there are surfaces that can cause Hard Light’s projectiles to bounce.

How To Get Hard Light Catalyst?

The Hard Light Catalyst increases the Exotic Auto Rifle’s stability by 18, which makes it much easier to control and aim the weapon while firing.

This can become useful when you tend to continuously fire at enemies, making it also a good bonus since you need to be accurate when aiming for ricocheting rounds.

You may obtain the Hard Light Catalyst as a reward when you complete Heroic or Nightfall Strikes.

To unlock the upgrade, you will have to defeat 1000 enemies with Hard Light.

Ricocheting rounds are guaranteed most of the time since the Hard Light’s rounds overpenetrate enemies.

Forcing rounds to ricochet is great for dealing bonus damage but not always necessary as this weapon does a good deal of damage already.

You can choose when you want to change this weapon’s damage type to best suit different enemies and make it easier to break shields.