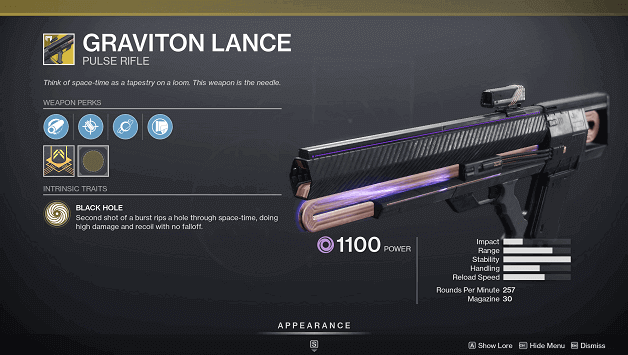 Think of space-time as a tapestry on a loom. This weapon is the needle.

The Graviton Lance is an Exotic Pulse Rifle that fires a two-round burst, with the second shot leaving a surprise for enemies.

This weapon is capable of firing up to 257 rounds per second with a magazine size that holds 30 rounds before needing to reload.

It fires 2 shots almost simultaneously, with the second one ripping a hole through space-time to deal extra damage.

How To Get Graviton Lance?

This Exotic Pulse Rifle was originally available as a reward from the “Sacrilege” story mission during The Red War.

It is now available in simpler ways in the game and can even be obtained as a drop almost anywhere or from Exotic Engrams.

You may obtain Graviton Lance from the following sources:

The Graviton Lance has a durable ranged barrel.

Kills with the Graviton Lance cause enemy targets to detonate, spawning void projectiles that track targets.

The Graviton Lance’s stock makes it stable but heavy

The second shot of a burst rips a hole through space-time, doing high damage and recoil with no falloff, allowing you to deal more damage every time you pull the trigger.

This makes it easier to kill enemies, especially if you can tame them out within close range to each other to trigger Cosmology.

Enemies together will be easier to fire and since the Graviton Lance fires a two-round burst, you can easily lang precision hits.

How to Get Graviton Lance Catalyst?

Additionally, the Graviton Lance will gain the Hidden Hand perk, which provides it with better target acquisition.

This makes it very easy to aim with the Graviton Lance and improves the distance from which it can hit enemies from.

You can obtain the Graviton Lance Catalyst randomly by doing Strikes or participating in the Crucible.

The catalyst can be unlocked by defeating 500 enemies with the Graviton Lance as well as 1000 with the Cosmology perk.

The Graviton Lance is an Exotic Pulse Rifle that rewards accurate players, causing damage in an area when you kill with it.

Since the Gravity Lance releases void projectiles when enemies are killed, you have less to worry about aiming at one enemy at a time.

Carefully placed shots at enemies will allow you to easily clear out groups within seconds thanks to the Black Hole trait and Cosmology perk.