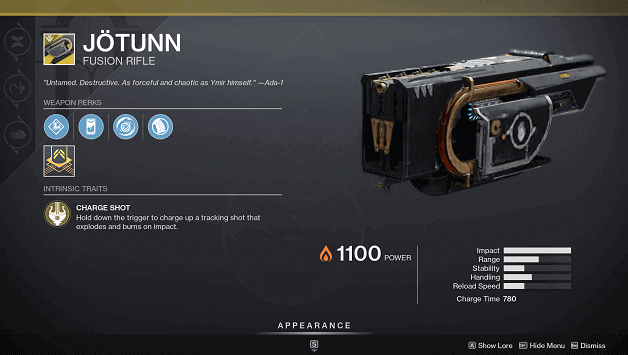 “Untamed. Destructive. As forceful and chaotic as Ymir himself.” –Ada-1

The Jotunn is an Exotic Fusion Rifle and appears to be the second strongest one that exists, capable of dealing immense amounts of damage.

It has a charge time of 780 and has a special feature that allows it to charge up a tracking shot to deal more damage to enemies.

This weapon has a special trait that allows it to disorient nearby combatants when an energy-matched shield explosion occurs.

How To Get Jotunn?

The Jotunn Exotic Fusion Rifle was originally obtained back during the Forsaken Expansion but things have changed after the Beyond Light Update.

You may now obtain Jotunn by heading to the Tower and accessing the Monument to Last Lights.

The following are needed to purchase Jotunn:

The Jotunn is optimized for an especially explosive payload.

The Jotunn’s grip is made of lighter material.

You can fire a charged shot by holding down the trigger to charge up a tracking shot that explodes and burns on impact.

This is great for firing when you are in motion and makes up for the difficulty in handling Fusion Rifles due to the charge and burst to fire they have.

There is no Jotunn Catalyst right now and there may be none in the future as this weapon seems to already be in its final stage.

One of the difficulties players have when using Fusion Rifles is the handling but with the Jotunn , things are slightly different and easier.

While the Jotunn fires in the same way as most Fusion Rifles, it has its Charge Shot intrinsic trait which it can use to fire tracking shots.

Up close, the Jotunn is very powerful as it is the second-highest damaging Exotic Fusion Rifle, with only a small damage difference from the highest.