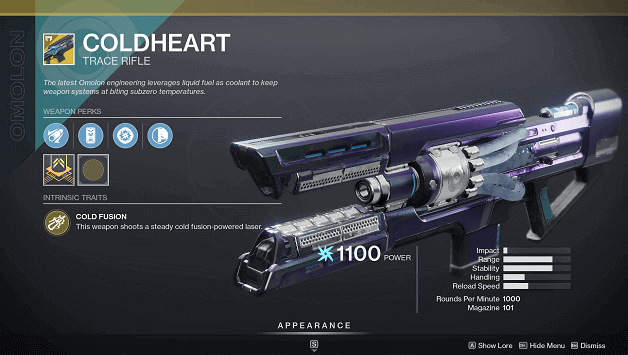 Accuracy is something that can be rewarding, especially when you are using this Exotic Trace Rifle, the Coldheart.

This deadly Trace Rifle is capable of firing a beam which does 1000 rounds a minute with a huge magazine capacity of 101.

Using this weapon gives players an advantage over stronger enemies and even Guardians due to its ability to deal more damage while it’s fired.

How To Get Coldheart?

You may obtain Coldheart from the following sources:

Back then you could get this Exotic Trace Rifle during The Red War but since this was removed it can now be obtained in a much easier way.

The Coldheart has a weighty barrel extension.

The Coldheart’s battery has a strong life.

Coldheart’s laser does exponentially more damage the longer it remains on a target.

This weapon has a versatile dual-purpose stock.

You can use the accurate beam it fires as an advantage to take on enemies easily, aiming for precision hits and maintaining damage per second.

How to Get Coldheart Catalyst?

The Coldheart Catalyst is an upgrade for the Coldheart which provides the weapon with an additional 18 stability and reload speed.

This makes it easier to stay on target while aiming and firing the weapon while also increasing the reload speed so you can continue firing again.

You can get the Coldheart Catalyst by completing strikes on the Heroic or Nightfall difficulty as a reward by a certain chance.

Upgrading Coldheart with its catalyst can be done by defeating 500 enemies with the Exotic Trace Rifle.

The Coldheart’s beam can easily be fired and it stays accurately where players aim it, making it easy to get precision hits within adjusting your aim.

Dealing damage with Coldheart will continuously increase the amount of damage to an enemy, making it deadly when used against strong enemies, even bosses.

When it comes to damage per second, Coldheart is well-known to be a favorite for rewarding players who can aim well with the weapon.