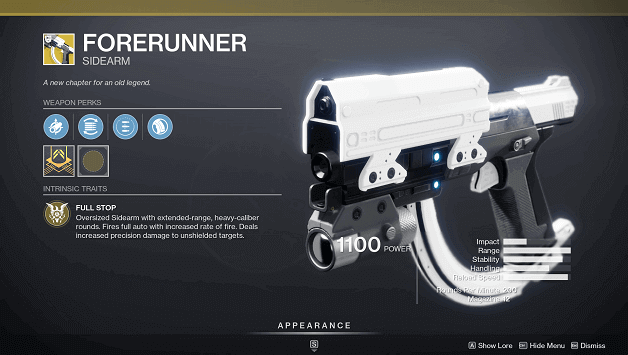 A new chapter for an old legend.

The Forerunner is an Exotic Sidearm which is believed to be a tribute to Halo’s “Magnum” being seemingly similar in concept and design.

This weapon can fire up to 200 rounds per minute with a magazine size of 12 rounds, capable of firing automatic or semi-automatic shots.

Players can utilize this Exotic Sidearm for its powerful semi-automatic shots for more accuracy or by unleashed hell with a full auto clip.

How To Get Forerunner?

You can get the Forerunner by first taking the “Magnum Opus” quest from Xur who can be found in Eternity.

You will then need to follow the quest steps until you head to Banshee-44 who will be the one to give you the Forerunner Exotic Sidearm.

The Forerunner features a dual-strength barrel.

The Forerunner is optimized for fast reloading.

The Forerunner is slightly easier to hold and aim.

The Forerunner is an Oversized Sidearm with extended-range and heavy-caliber rounds. It fires full auto with an increased rate of fire.

This Exotic Sidearm does increased precision damage to unshielded targets, making it easier to take kill them in a smaller amount of time.

The bonus range and damage make the Forerunner great for either automatic fire at the moderate range or for picked shots from a distance.

How To Get Forerunner Catalyst?

The Forerunner Catalyst provides you with the ability to consume part of your ammo reserves to convert your next thrown grenade into a fragmentation grenade.

This grenade is powerful and perfect for dealing damage in a large area to clear out multiple enemies instantly.

The Forerunner catalyst can be obtained by completing a quest that you obtain after collecting the Anomalous Access Card from Xur when you are rank 16 (Treasure room in Eternity).

The Forerunner is a versatile sidearm that can be utilized for single shots or unloading whole clips for increased precision damage that shreds unshielded targets.

Being able to consume ammo to create a powerful fragmentation grenade can come in handy at certain times, giving players multiple options when it comes to killing enemies.

Since you can fire this weapon in two different ways, it can be effectively used up close or at a distance in combat.