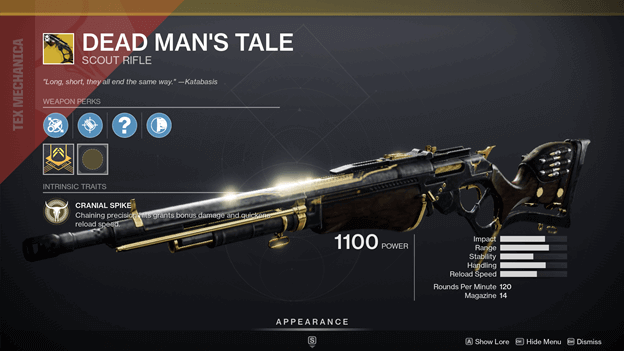 “Long, short, they all end the same way.” –Katabasis

The Dead Man’s Tale is an Exotic Scout Rifle that is treasured for its different rolls and for rewarding players for being accurate.

This Exotic Scout Rifle is capable of firing 120 rounds per minute and has a magazine capacity of 14 rounds before needing to reload.

Players utilize this weapon because of its ability to deal increased damage when precision hits occur, causing the weapon to deal even more damage with continuous shots.

To get Dead Man’s Tale, you may need to go a little bit out of your way to collect and perform a few tasks that give it as a reward as it is not obtainable in other ways.

How To Get Dead Man’s Tale?

You can obtain the Dead Man’s Tale by completing a quest called “The Voice on the Other Side” followed by completing the Presage activity for additional rolls.

“The Voice on the Other Side” is an exotic quest that sends you in search of a distress signal and later reporting to Zavala when everything is done.

Completing the quest rewards you with the Dead Man’s Tale.

The Dead Man’s Tale has an ultra-light barrel.

Future drops of the Dead Man’s Tale will have random rolls.

The Dead Man’s Tale is optimized for recoil control.

This makes it easier for players to deal a large amount of damage in a small amount of time, maximizing DPS, especially for those who can deal with successive Precision Damage.

Precision Damage happens when you deal damage to a specific part of an enemy (weak spot) which causes them to take more damage from your attack. 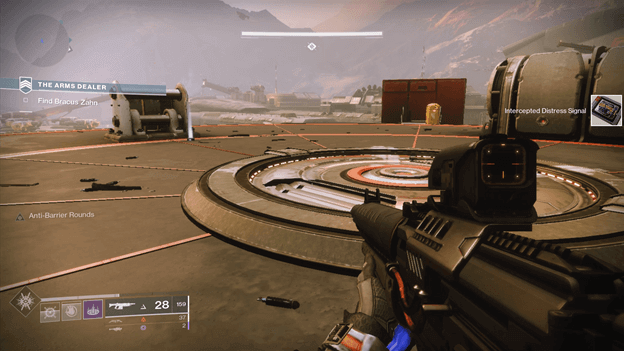 To get started with obtaining Dead Man’s Tale, you will first need to get the Presage quest, which is obtained by finding the Intercepted Distress Signal.

You can find the Intercepted Distress Signal by doing the strike called “The Arms Dealer” and instead of following the main objectives, you head right after your first encounter with enemies.

Keep to the right and follow the landing platforms and you will encounter several turrets, which you should fight your way through until you find a big Cabal enemy.

Take out the Cabal enemy and you will be able to open up a chest that contains the Intercepted Distress Signal, which next requires you to go to Zavala in The City.

The Voice on the Other Side Quest will be active, leading you to the Presage Exotic Quest, which is located on the Tangled Shore.

The Voice On The Other Side Quest (Exotic Quest Presage) 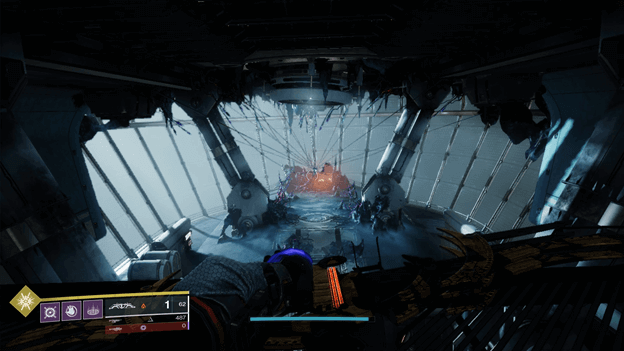 After speaking with Zavala, you will need to head over to the Tangled Shore and enter the Exotic Mission: Presage.

This puts you on a ship where the traces of the distress signal came from and you will need to make your way through the Presage by doing what is slightly a mixture of puzzles and a maze.

At the end of the quest, you will be able to obtain a rifle from a deceased Guardian, which happens to be the Dead Man’s Tale.

Once the mission has ended, you need to head back to Zavala at The City and speak with him, which ends with you collecting the Dead Man’s Tale Exotic Scout Rifle as a reward.

How To Get Dead Man’s Tale Catalyst?

You can unlock the Dead Man’s Tale catalyst to provide it with the Dark-Forged Trigger perk, which increases hipfire rate of fire as well as removes its penalties.

The Dark-Forge Trigger perk is perfect for those who prefer to stay in motion or would like to keep a wide view of the area instead of zooming in.

You can obtain the Dead Man’s Tale catalyst by completing the “At Your Fingertips” quest, which can be obtained from Commander Zavala once you have the Exotic Scout Rifle.

Unlocking the Dark-Forged Trigger perk from the Dead Man’s Tale catalyst can be done by defeating 800 enemies using the Exotic Scout Rifle.

Opening hidden caches during the “Presage” mission will speed up the process of unlocking the Dead Man’s Tale catalyst.

The Dead Man’s Tale is widely popular due to its ability to continuously deal more damage when you deal precision hits.

Players can try to farm the Dead Man’s Tale until they get a roll they prefer when it comes to its stats that best fits their preferences.

This weapon is perfect for players who always aim to deal precision hits and this makes it extremely deadly in both PVE and PVP.