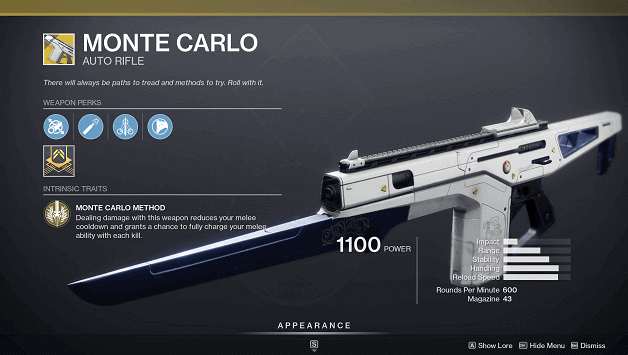 There will always be paths to tread and methods to try. Roll with it.

The Monte Carlo is an Exotic Auto Rifle that has a huge hint about its benefits to those who often use melee attacks.

This Exotic Auto Rifle is capable of firing 600 rounds per minute with a magazine capacity of 43 before needing to reload.

Players can utilize the Monte Carlo if they often perform melee attacks and benefit if they build their stats for melee attacks.

How To Get Monte Carlo?

You may obtain Monte Carlo from the following sources:

Shots from the Monte Carlo knock the target back farther.

The Monte Carlo has a versatile dual-purpose stock.

When you deal damage with the Monte Carlo, your melee ability will begin to recharge faster while killing enemies has a chance to fully charge it.

This is very useful to players who often use melee attacks or want to further increase the cooldown if they have stat builds that focus on melee.

The Monte Carlo does not have a catalyst at the moment but performs extremely well even without one and it is unsure if there will be one in the future.

The Monte Carlos is a huge help for players who often perform melee attacks during combat, making it easy to regenerate the ability.

Its ability to fully reset your melee ability with a kill can be a lifesaver during combat and to compliment it, melee kills increase its damage.

You can get the best benefits by using this weapon and often dealing melee attacks, making it easy to clear out enemies in seconds.