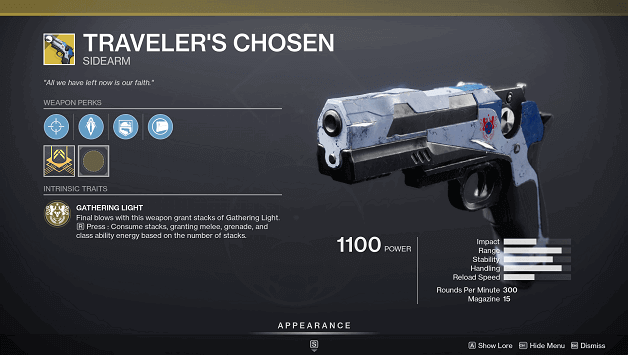 “All we have left now is our faith.”

The Traveler’s Chosen is an Exotic Sidearm that rewards players with more energy as they continuously defeat enemies.

This Exotic Sidearm is capable of firing 300 rounds per minute and has a capacity of 15 rounds per magazine.

Defeating enemies with the Traveler’s Chosen triggers the Gathering Light ability which allows you to gather stacks to boost stats or to consume.

How To Get Traveler’s Choice?

The Traveler’s choice was once obtainable as a reward for completing the Exodus: Evacuation quest which you could get from Zavala at the Tower.

Its quest is no longer available and this Exotic Sidearm can now be obtained by acquiring it from the Monument to Lost Lights.

The following are needed to purchase Traveler’s Choice:

The Traveler’s Chosen has an agile sidearm sight.

Rounds from the Traveler’s Chosen cause extra damage to combatants’ shields and overpenetrate targets.

3) Gift of the Traveler (Trait)

It is especially easy to grip the Traveler’s Chosen.

By pressing reload, you can consume the Gathering Light stacks to provide you with melee, grenade, and class energy depending on the number of stacks that you have.

Being able to regenerate energy for these abilities will allow you to deal even more damage and help you fight through missions.

How to Get Traveler’s Chosen Catalyst?

Unlocking the Traveler’s Chosen catalyst provides you with two perks, which are Osmosis and Full Auto Trigger System.

Osmosis allows you to match your weapon’s damage type to your subclass when you use your grenade ability.

The Full Auto Trigger System allows you to hold down the trigger to continuously unleash rounds in full auto.

You can get the Traveler’s Choice catalyst by completing strikes or participating in Gambit and Crucible matches.

Unlocking the Traveler’s Choice catalyst perks can be done by defeating 700 enemies using the Exotic Weapon.

The Traveler’s Choice becomes extremely effective if you can continuously get final hits during a mission, allowing you to become more efficient in combat.

You can choose between keeping the stacks from Gathering Light for faster reload speed, better weapon handling, and target acquisition.

This weapon can strategically be used based on what you prefer when fighting enemies and when used as your main weapon it can easily get more stacks.