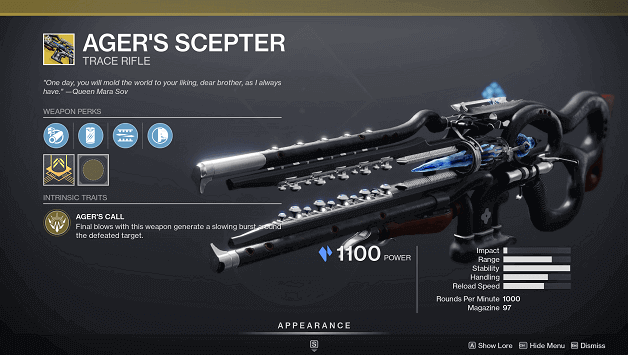 “One day, you will mold the world to your liking, dear brother, as I always have.” –Queen Mara Sov

Ager’s Scepter is an Exotic Trace Rifle imbued with Stasis energy which allows you to slow enemies in an area with each one you defeat.

This Exotic Trace Rifle can unleash an incredible volley of 1000 rounds per minute with a magazine capacity that holds 97 rounds.

You can use this weapon to easily take on multiple enemies, killing them and slowing others as you continuously unleash rounds upon them.

How To Get Ager’s Scepter?

You can obtain the Ager’s Scepter Exotic Trace Rifle by following the Tracing the Stars quests 1, 2, and 3 to pick up the “A Hollow Coronation” quest.

Following all the steps will result in you heading back to the H.E.L.M. to speak with Mara Sov, which prompts a cutscene and later rewards you with Ager’s Scepter.

Each bolt fired constrains recoil with the Ager’s Scepter.

The Ager’s Scepter’s grip is made of lighter material.

Final blows dealt with Ager’s Scepter generate a slowing burst around the defeated target, which is great for when dealing with multiple enemies.

The slowing burst will help you easily target enemies since they will be less efficient due to the lack of speed.

Since Ager’s Call has been optimized for recoil control, you can easily pick the enemies off one by once when they are slowed.

How To Get Ager’s Scepter Catalyst?

The increase in range makes the Ager’s Scepter deadlier from afar and allows you to hit enemies similar to the range of a rifle.

The Ager’s Scepter Catalyst can be obtained by defeating non-Guardian enemies found anywhere in the system.

Going through the trouble of obtaining Ager’s Scepter is worth it due to its ability to slow enemies and since it can shred through enemies easily.

You can use this Exotic Trace Rifle effectively to take on groups of enemies or single powerful enemies since it has reduced recoil and can fire several rounds in seconds.

Making it much easier, you can easily replenish ammo from your reserves by dealing with Stasis final blows to enemies, allowing you to continue shattering everything in the field.