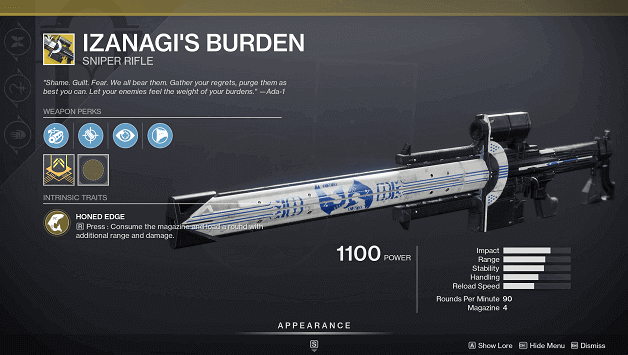 “Shame. Guilt. Fear. We all bear them. Gather your regrets, purge them as best you can. Let your enemies feel the weight of your burdens.” –Ada-1

Izanagi’s Burden is one of the deadliest Exotic Sniper Rifles that you can get in Destiny 2, capable of dealing a large amount of damage with a single charged shot.

This weapon normally deals 90 rounds per minute with a magazine capacity that holds 4 rounds before needing to be reloaded.

Players love this weapon for its ability to stuff all of its rounds to release them in a single shot, dealing insane amounts of damage.

How To Get Izanagi’s Burden?

Izanagi’s Burden is available for acquisition from the Monument to Lost Lights, making it now easier to get than it previously was during the time when Forsaken was new.

Simply head to the Tower and go to the Monument to Lost Lights and make sure you have all the resources required to acquire Izanagi’s Burden.

The following are needed to purchase Izanagi’s Burden:

Izanagi’s Burden is equipped with a stable barrel attachment.

The Chaperon is capable of firing longer distances.

Pressing reload allows you to consume the whole magazine to load a round into the weapon’s chamber that has an increased amount of range and damage.

This allows you to hit targets further as well as deal even more damage in a small amount of time, great for taking down powerful enemies or other Guardians.

How to Get Izanagi’s Burden Catalyst?

The increase in range makes the Izanagi’s Burden deadlier from afar and allows you to hit enemies similar to the range of a rifle.

The Izanagi’s Burden Catalyst can be obtained by defeating non-Guardian enemies found anywhere in the system.

Izanagi’s Burden is capable of dealing with some of the highest damaging shots amongst other Sniper Rifles and to make things even crazier, its catalyst makes it more efficient.

Being an Exotic Sniper Rifle, the Izagani’s Burden on its own already deals incredible damage and with its intrinsic trait as well as its catalyst, it can easily take down powerful enemies.

This Exotic Sniper Rifle is a favorite in PVP due to its ability to kill Guardians easily, that is if you are accurate enough with the weapon.