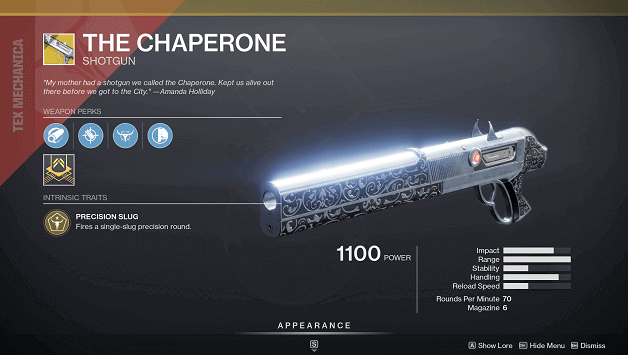 “My mother had a shotgun we called the Chaperone. Kept us alive out there before we got to the City.” – Amanda Holiday

The Chaperone is an Exotic Shotgun that has a different type of projectile from other shotguns, firing a slug instead of a burst of pellets.

This Exotic Shotgun is capable of firing 70 rounds per minute and can have up to 6 rounds stored in its magazine.

With this weapon’s ability to fire a slug instead of a scattered burst, it becomes more accurate and can do more damage, especially with precision shots.

How To Get The Chaperone?

The Chaperone can be obtained once you complete the “Holliday Family History” quests, which you can get as a random drop at the end of Crucible matches.

You will need to head to Amanda Holliday who is at The City and you will then need to participate in a tournament.

Completing all of the objectives will allow you to return to Amanda Holliday, who will give you The Chaperone as a reward. 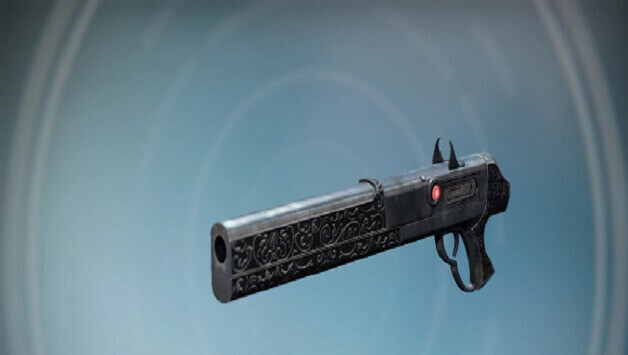 The Chaperone has a durable ranged barrel.

The Chaperon is capable of firing longer distances.

This weapon is optimized for recoil control.

Instead of firing a scattered burst, this Exotic Shotgun fires a single-slug precision round that is more accurate than a spread shot.

This will allow you to deal a lot of damage easily as the projectile is a single round and can easily hit targets at a moderate distance.

As of now, the Chaperone is known to not have any catalyst and there is no guarantee it will have one in the future.

The Chaperone is one of the highest ranged shotguns in Destiny 2 and this is perfect for its slug projectiles, making it easier to get precision kills.

With its The Roadborn trait, The Chaperone becomes even easier to wield whenever you successfully do precision kills.

Continuous precision kills will grant you more damage and better handling, making you unstoppable once you get used to firing at weak spots.