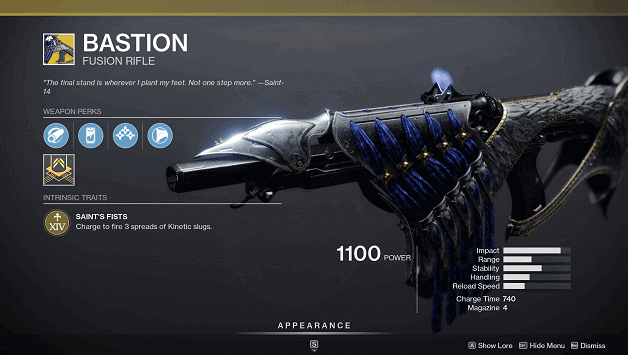 “The final stand is wherever I plant my feet. Not one step more.” –Saint-14

Bastion is an Exotic Fusion Rifle that fires more rounds than any other type of Fusion Rifle in a single round. This Exotic weapon first appeared on Season of Dawn (Season 9).

This Exotic Fusion Rifle saves ammunition and deals more damage compared to other Fusion Rifles, making it efficient when it comes to shots and ammo conservation.

Players can use Bastion to deal more damage to Unstoppable champions, making it easier to defeat them in missions and for objectives.

How To Get Bastion?

Bastion was once obtained by completing the Exploring The Corridors of Time mission but now it has been moved and can be purchased from the Monument to Lost Lights.

The following are currencies and materials are needed to purchase Bastion: 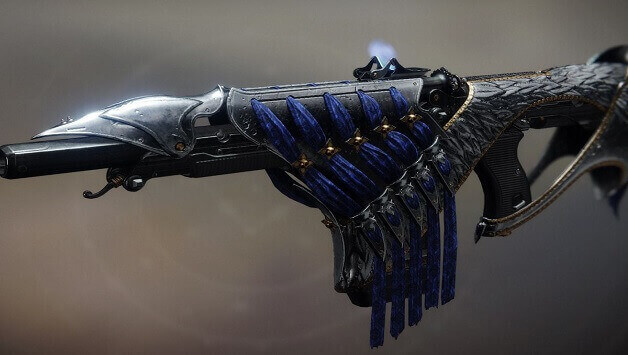 The Bastion fires staggering projectiles that are strong against Unstoppable Champions.

The Bastion has a versatile dual-purpose stock.

Bastion can be charged to fire 3 spreads of Kinetic slugs which allows it to fire more shots at the cost of one round.

This allows you to release a total of 21 bolts in a single burst (7 bolts per shot) to deal a lot of damage to targets.

The Saint’s Fist intrinsic trait makes the Bastion a powerful weapon during both PVE and especially in PVE when you can concentrate your shots.

The Bastion currently does not have a catalyst slot and it is unsure if this weapon will have one in the future.

Much like any other Fusion Rifle, Bastion is capable of dealing high amounts of damage but with the Saint’s Fist trait, it can deal even more.

The ability to unleash multiple shots with a single round provides players with the ability to cause serious damage, especially when doing precision shots.

Unstoppable combatants that you encounter will not stand a chance against this weapon as it staggers them and deals more damage.