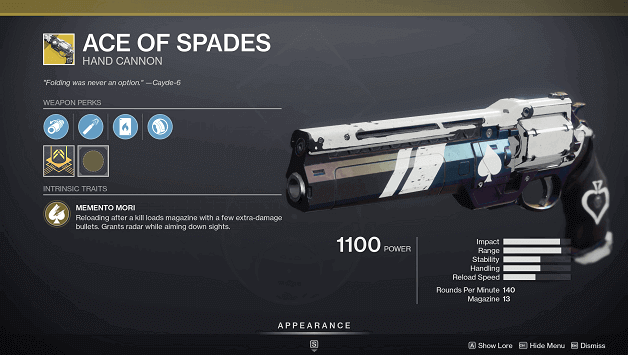 “Folding was never an option.”― Cayde-6.

The Ace of Spades is an Exotic Hand Cannon which belonged to Cayde-6 who was killed by Uldren Sov, who then took the weapon, which later on is retrieved by the Guardian.

Firing up to 140 rounds per minute with a magazine capacity that holds 13 rounds, the Ace of Spades also provides its user with a vision of their radar when aiming down the sights.

This weapon provides you with the ability to quickly deal explosive damage to enemies and reload quickly while successfully defeating enemies.

How To Get Ace of Spades?

The Ace of Spades was available as a reward back then and could be obtained after a series of steps following the Forsaken questline. You can now obtain the Ace of Spades by purchasing it from the Exotic Archive at the Monument to Lost Lights.

The following are needed to purchase Ace of Spades :

The Ace of Spades has a balanced barrel.

The Ace of Spades is modified to fire at longer distances.

Precision kills with the Ace of Spades increase reload speed and cause the target to explode, which deals Solar damage to nearby enemies.

The Ace of Spades is easier to hold and aim.

The Memento Mori gives Ace of Spades the ability to reload extra-damage bullets after killing an enemy with it.

Additionally, when aiming down the sites with the Ace of Spades, you will be able to see your radar unlike with other weapons.

The Memento Mori trait works well with the Ace of Spades’ Firefly trait, making it easier to kill enemies with explosive damage while increasing reload speed.

The ability to see your radar even when the weapon is being aimed makes it easy to trace enemies and fight them.

How to Get Ace of Spades Catalyst?

The Funeral Pyre perk is unlocked once you complete the Ace of Spades catalyst requirement, which improves the effects of the Firefly trait.

When Memento Mori is active, the Firefly trait will deal more damage, making it easier to kill multiple enemies in a short amount of time.

You may obtain the Ace of Spades catalyst during Strikes or while participating in the Crucible. It’s a rare random drop which requires a bit of grinding.

If you are lucky then you may get this catalyst within the participation of a few rounds of the matches or else you may need to go for several weeks of higher-level Strikes or the Crucible matches.

To unlock its upgrade, you will need to defeat 500 enemies using the Ace of Spades.

The Ace of Spades is a powerful Exotic Hand Cannon which makes it easy to take out enemies, especially when you deal precision damage.

Memento Mori will remain active as long as you reload after killing enemies and the Firefly trait will allow you to deal bonus damage as well as cause explosions.

Players who make use of this weapon can easily take on enemies with perfectly aimed shots, targeting one enemy at a time while killing others passively.