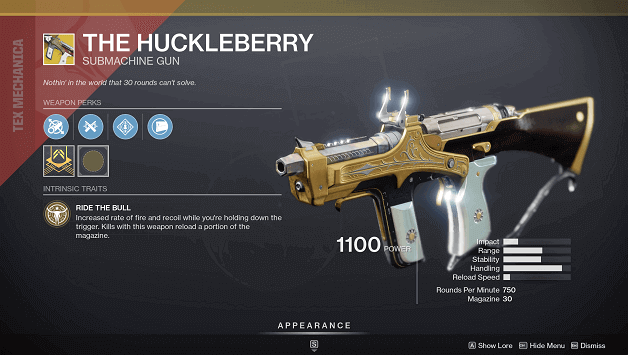 Nothin’ in the world that 30 rounds can’t solve.

Nothing shreds through enemies faster than The Huckleberry, an Exotic Submachine Gun that deals more damage as you kill enemies.

This weapon can fire 750 rounds per minute which increases beyond this fire rate when its trigger is held, it also has 30 rounds per magazine.

This is the perfect weapon for when you want to run and gun enemies from mid-range to up close, almost having an infinite amount of ammo with multiple kills.

How To Get The Huckleberry?

You may obtain The Huckleberry from the following sources: 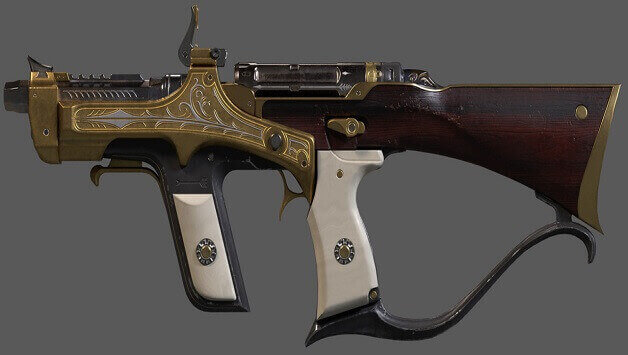 The Huckleberry is equipped with an ultra-light barrel.

Rounds fired from The Huckleberry ricochet off hard surfaces.

The Huckleberry is especially easy to grip.

Increased rate of fire and recoil while you’re holding down the trigger. Kills with this weapon reload a portion of the magazine.

The longer you hold down the trigger, the faster you let out rounds while also increasing your recoil, making it best to be somewhat closer to enemies while you shred them.

Since kills will reload a portion of the weapon, it’s best to have a good distance that provides you with accuracy so you can continue killing enemies while restoring round in your magazine.

Along with the Rampage trait, Ride The Bull will allow you to continuously unleash ammo at your targets will also provide you with multiple bonuses.

How to Get The Huckleberry Catalyst?

The Huckleberry Catalyst provides the Huckleberry with the Bull Rider perk, which completely reloads the entire magazine when you kill enemies.

This provides you with a seemingly infinite amount of rounds as long as you keep killing enemies, allowing you to charge into battle shredding enemies along the way.

The Huckleberry Catalyst is obtained by chance when you complete strikes, Crucible and Gambit matches.

Imagine having an infinite supply of ammo, that’s exactly what The Huckleberry feels like and you can keep it going as long as you take enemies out.

Going on a rampage with this weapon will give you enough damage, replenishable ammo, and the ability to gun your way through groups of enemies.

To add more to this weapon’s potential, its ricochet rounds will bounce off surfaces and can hit more enemies, making it even deadlier.