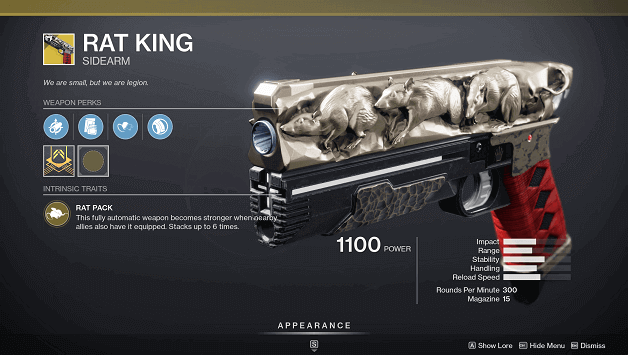 We are small, but we are legion

The Rat King is an Exotic Sidearm which is more effective when multiple players in a fireteam have the weapon equipped. This weapon is capable of dealing 300 rounds per minute and is limited only to a magazine size of 15 shots.

Its ability to provide more damage with more people present who wield the same weapon makes it good for taking out tougher enemies as a group.

How To Get Rat King?

The Rat King was previously obtained by completing the Enemy of My Enemy quest which leads you to complete a set of steps with another person who has the item.

Since Titan no longer exists, you can get Rat King by heading to the Monument to To Lost Lights where you can acquire it.

The following are needed to purchase Rat King:

Reloading immediately after a kill grants a brief period of invisibility.

It is slightly easier to hold and aim with Rat King.

This fully automatic weapon becomes stronger when nearby allies also have it equipped. Stacks up to 6 times. When multiple members in a fireteam have this weapon equipped, you can all deal more damage because of this bonus.

You can plan to use the Rat King Exotic Sidearm when you are about to start an activity or may equip it if you notice your other fireteam members have it equipped.

How to Get Rat King Catalyst?

The Rat King’s Infestation perk improves the aim assist as well as recoil direction of the weapon while also refreshing your health when Vermin invisibility is triggered.

Players who focus on triggering Vermin will have better survivability and will remain less of a target due to the invisibility.

You may obtain the Rat King Catalyst by completing Strikes on the Heroic or Nightfall difficulty. It will not take much time to get this Exotic Sidearm Catalyst though it’s Random Number Generator (RNG) based.

To upgrade the Rat King Catalyst, you will have to be with another member who defeats 1000 enemies with the Rat King.

The Rat King is a great weapon to use when you are with cooperative allies who use the weapon as well, giving bonus damage for everyone with it equipped.

Unlocking the Rat King Catalyst will require some patience and the help of someone willing to team up with you who defeats a ton of enemies.

The Rat King is still good on its own because of the Vermin perk, providing you with stealth capabilities and a way to escape danger.