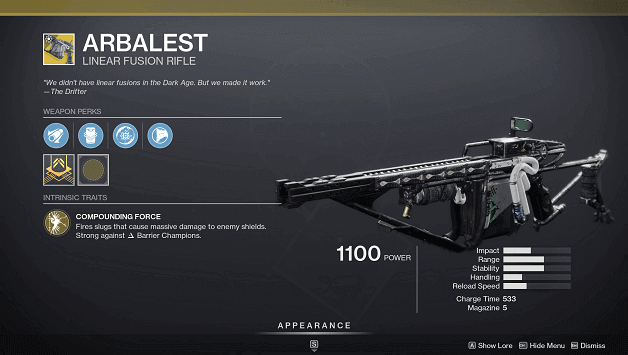 “We didn’t have linear fusions in the Dark Age. But we made it work.” –The Drifter

The Arbalest is an Exotic Linear Fusion Rifle that fires powerful slugs that deal massive damage against shielded enemies.

This Exotic Linear Fusion Rifle first appeared in Season of the Drifter (Season 6) and is perfect for taking down stronger enemies and can destroy their shields in a short amount of time.

As this weapon destroys enemy shields, it also gains the ability to deal bonus damage against them, making it easier to finish them off.

How To Get Arbalest?

The Arbalest was first obtainable during the Revelry spring event but now can be obtained in different ways within the system.

You may obtain Arbalest from the following sources: 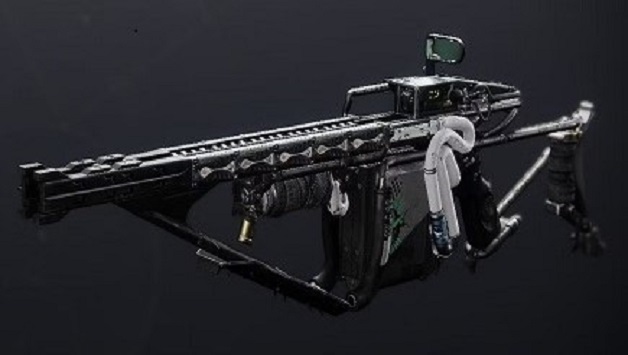 The Arbalest has a weighty barrel extension.

Provides the Arbalest with distance optimizations.

When an enemy’s shield is broken by the Arbalest, they become vulnerable to Kinetic damage for a brief period.

Arbalest has a versatile dual-purpose stock.

The Arbalest fires slugs that cause massive damage to enemy shields, which is strong against Barrier champions.

This makes the Arbalest a very good choice when facing shielded enemies, allowing you to easily kill them after you destroy their shields.

The Disruption Break trait benefits greatly from this since you can destroy shields quickly, allowing you to deal additional Kinetic damage to them.

How to Get Arbalest Catalyst?

Arbalest Catalyst is a random drop that can be obtained by completing Gambit, the Crucible & Vanguard Strikes playlist activities. It’s not that easy to get this weapon easily as it requires you to spend some amount of time grinding the playlist activities.

Before trying to obtain the Catalyst make sure that you have equipped the Arbalest. Otherwise there is no chance of getting this Exotic Linear Fusion Rifle Catalyst.

When breaking a combatant’s shield the Arbalest will refill its magazine by taking ammo from its reserves.

Energy weapons will regenerate ammo on hit when matching the damage type with the target combatant’s shield.

This makes it easier for you to continuously fire at enemies by breaking their shields, saving you time from reloading.

The bonus of regenerating ammo when hitting enemies with an energy weapon can be a good way to replenish ammo and fight at the same time.

The Arbalest works great with an energy weapon, especially when you have the Arbalest Catalyst upgrade to provide you with energy ammo regeneration.

This Exotic Linear Fusion Rifle is an ideal weapon for when you need to take out Barrier champions during missions or for completing an objective.

Using this weapon can provide you with an advantage depending on which enemies you are going up against, mainly those who are shielded.