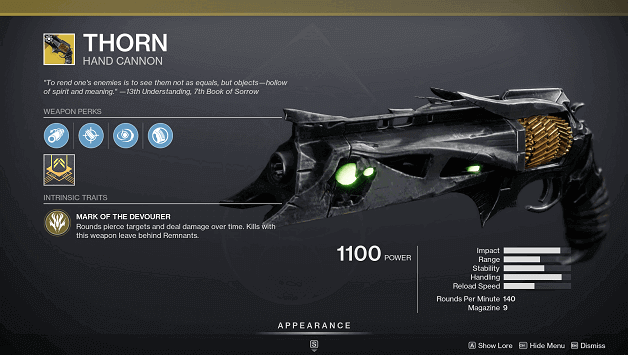 “To rend one’s enemies is to see them not as equals, but objects–hollow of spirit and meaning.” –13th Understanding, 7th Book of Sorrow

Hand Cannons are capable of dealing tons of damage but imagine one that also dealt damage over time, that is exactly what Thorn does.

Thorn is an Exotic Hand Cannon that deals damage over time thanks to its Mark of the Devourer trait and is capable of firing 140 rounder per minute 9 rounds per magazine.

This weapon is capable of easily bringing down single targets and when used accurately can easily clear a whole group of enemies.

How To Get Thorn?

Thorn was previously obtained by finding its quest as you head into the Salt Mines in the EDZ to find a hidden camp.

This quest was removed and you may now obtain Thorn from the Monument to Lost Lights, located within the Tower.

The following are needed to purchase Thorn:

Thorn is equipped with a balanced barrel.

Absorbing a Remnant strengthens Mark of the Devourer and partially refills Thorn’s magazine.

The friction on Thorn’s grip is particularly strong.

Mark of the Devourer

Thorn fires around that pierce targets and deals damage to them over time. Kills with this Exotic Hand Cannon leave behind Remnants.

This goes well with Thorn as the base damage alone is already strong and adding another source of damage makes it easy to defeat enemies.

There currently is no catalyst for Thorn but this Exotic Hand Cannon is already strong enough without one and it is unsure if this weapon will have one in the future.

The Thorn is a favorite weapon when it comes to both PVE and PVP as it can easily deal heavy damage to single targets.

The more you kill with this weapon, the stronger Mark of the Devourer can become and you can continue fighting with fewer reloads.