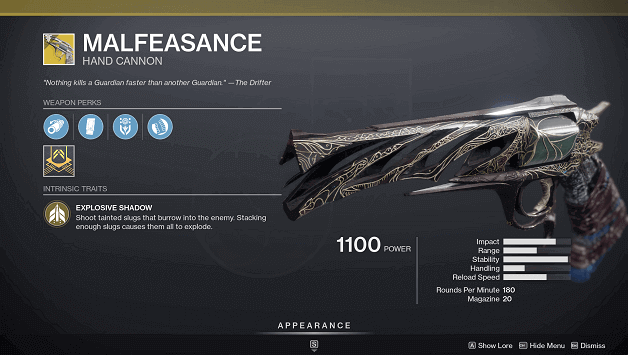 “Nothing kills a Guardian faster than another Guardian.” – The Drifter

The Malfeasance is an Exotic Hand Cannon that can deal a lot of damage, especially to Taken enemies thanks to its unique ability to fire tainted slugs.

Not only does this Exotic Hand Cannon deal bonus damage to Taken enemies, but it also does more damage against Invader during Gambit matches.

Players can make use of this weapon’s ability to deal with explosive damage after stacking slugs with enemies, making it easy to take down foes with larger health.

How To Get Malfeasance?

You can get the Malfeasance by completing its Exotic Quest, which you may start by doing Gambit matches until Ascendant Primeval spawns.

Further steps include you defeating 25 Taken bosses or minibosses before you can proceed to complete a Corrupted Strike, leading you to Callum’s Grave.

Continue completing the next step which requires you to bank motes during a Gambit match until you score enough, providing you with another step called Lights Out.

You will need to defeat 25 Guardians in Gambit, which can be done by invading or defeating invaders that interfere with your side.

It will also be required that you defeat 4 Guardians in a single invasion or have a teammate do this 3 times for you.

Once these have been completed, head back to the Drifter and he will give you the Malfeasance.

The Malfeasance has greatly increased magazine size but reloads much slower.

Bonus damage is dealt with Taken enemies and Gambit invaders with the Malfeasance.

The Malfeasance’s grip is weighted for better recoil control.

Shoot tainted slugs that burrow into the enemy. Stacking enough slugs causes them all to explode.

The Malfeasance fires tainted slugs at enemies, these slugs will stack as you continuously fire at them and will explode after enough have been stacked.

This will allow you to deal more damage to enemies as you successfully hit them with your shots.

Currently, the Malfeasance does not have a catalyst to upgrade it and it is unsure whether one will be available in the future.

The Malfeasance is a deadly Hand Cannon that is worth the effort to get due to its capabilities of providing a high amount of damage.

This weapon is useful during missions against Taken enemies as well as during Gambit matches to easily kill invaders.

High amounts of damage can be done with the Malfeasance’s shot and even more when its tainted slugs explode after stacking.