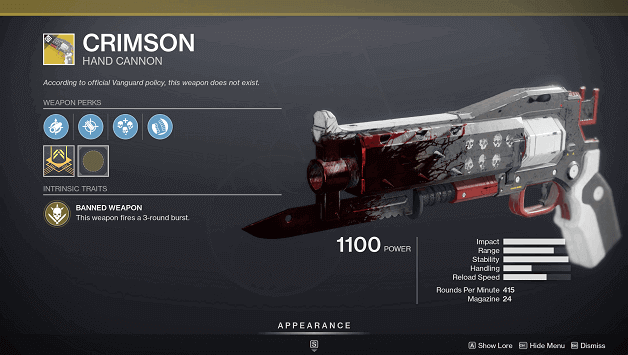 According to official Vanguard policy, this weapon does not exist.

When it comes to hand cannons, you would expect such weapons to have a slower rate of fire, but things are different with the Crimson.

The Crimson is an Exotic Hand Cannon that fires a 3-round burst, which is capable of firing 415 rounds per minute from a magazine with a capacity of 24.

You can deal high amounts of accurate damage due to its burst fire trait and heal yourself with kills and replenish ammo with precision shots.

How To Get Crimson?

You may obtain Crimson from the following sources:

The Crimson features a dual-strength barrel.

The Crimson is modified to fire at longer distances.

Kills with the Crimson heal the wielder while precision kills will also refill the magazine.

The Crimson has a custom grip that is weighted to provide it with better recoil control.

The banned weapon intrinsic trait causes the Crimson to fire a 3-round burst.

With the ability to fire a 3-round burst, the Crimson is capable of dealing a high amount of damage, especially since it is a hand cannon.

The faster you can fire rounds from this weapon, the faster you will be able to heal yourself with its Cruel Remedy trait and refill its magazine with precision kills.

How to Get Crimson Catalyst?

The crimson Catalyst will upgrade the Crimson by increasing its range by 18 once you have completed its required challenges.

The increase in range makes the Crimson deadlier from afar and allows you to hit enemies similar to the range of a rifle.

The Crimson Catalyst can be obtained by defeating non-Guardian enemies found anywhere in the system.

To unlock the Crimson Catalyst’s upgrade, you will need to defeat 300 enemies with precision damage when using the Crimson.

The Crimson is quite a remarkable and deadly weapon due to its ability to unleash several shots and the base damage of it being a hand cannon.

With the ability to heal you when you kill enemies, this can help improve survivability, allowing you to rush into combat while carefully picking enemies off.

Since it provides ammo replenishing with precision kills, you can continuously fight off enemies with seemingly unlimited ammunition.