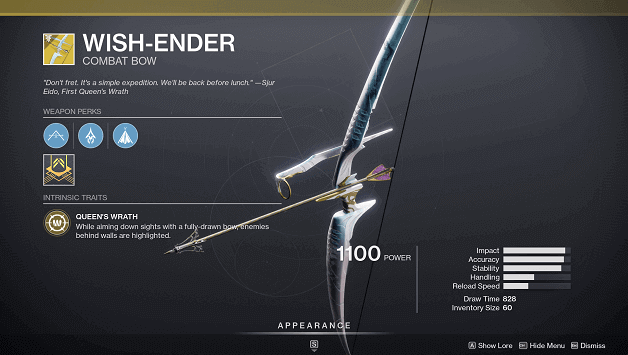 The Wish-Ender is a deadly bow that provides players with the ability to deal excessive damage to multiple targets.

This bow has increased accuracy with a reduction to draw time and stability, which is worth it because of the high damage.

You can easily take on multiple enemies with this bow and track them behind walls thanks to its unique perk.

How To Get Wish Ender?

To get the Wish-Ender, you will need to complete the Shattered Throne dungeon and interact with the Sjur Eido Statue.

The statue is holding a bow and has 3 bowls in front of it which you will need to interact with before returning to defeat three different bosses to turn their tokens in Waking versions.

You will need to bring the Waking tokens back to Sjur Eido and will receive the Wish-Ender afterward.

The Wish-Ender is a tightly strung bow.

The Wish-Ender is specialized to fight Taken targets.

Piercing arrowhead that damages the target on entry and exit. One shot can overpenetrate multiple targets.

While aiming down the sights with a fully drawn bow, enemies behind walls are highlighted.

This makes the bow useful when you need to track enemies, providing you with their locations when they are behind walls.

Using the Queen’s Wrath can be very useful in PVP because of the enemy highlighting, as well as with PVE for getting the upper hand against enemies that are taking cover.

The Wish-Ender currently has no catalyst upgrade.

The Wish-Ender is the perfect weapon for finding enemies who are hidden behind walls so you can get them before they even notice you.

Sacrificing draw speed and stability, this powerful bow can pierce several enemies which deal damage upon entry and exit.

Queen’s wrath is for finding enemies while the Wish-Ender’s perk is great for lining up shots to kill multiple enemies easily.