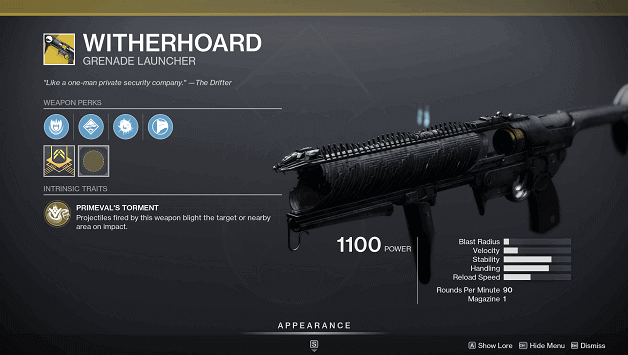 The Witherhoard is an Exotic Grenade Launcher that possesses Taken energy, capable of unleashing their blight against enemies.

This Exotic Grenade Launcher is capable of unleashing 90 rounds per minute and can fit 1 grenade into its chamber.

You can deal damage to enemies through two sources with this weapon which are the initial explosion as well as with damage over time.

The Witherload was originally a reward from the Season of Arrivals but can now be obtained by acquiring it from the Monument to Lost Lights.

The following are needed to purchase Witherhoard:

The Witherhoard is weighted for vertical recoil.

The Witherhoard’s explosives are more effective.

Blighted targets take damage over time and blight the nearby area on death.

The Witherhoard has a versatile dual-purpose stock.

Projectiles fired by the Witherhoard blight the target or nearby area on impact, which causes them to take damage over time.

Enemies affected by the blight or that are within a blighted area will take damage over time, allowing you to easily kill multiple enemies.

This will allow you to easily deal with high amounts of damage from the base damage of the Witherload as well as the damage over time.

How to Get Witherhoard Catalyst?

The Silent Alarm perk increases the Witherload’s handling and allows it to automatically reload after a short period when holstered.

This allows you to easily switch between weapons and switch back to the Witherhoard, which will most likely already have more ammo in its magazine.

You may obtain the Witherload catalyst by completing a quest called The Bank Job, which is an Exotic Quest you can get from Banshee-44 once you have the Witherload.

To unlock the Silent Alarm upgrade once you have the Witherload catalyst, you will need to defeat 400 enemies with the Witherload.

The Witherload is known to be one of the better Exotic Weapons which can deal high amounts of damage to enemies due to its multiple sources.

You can easily cause enemies that are directly hit or those standing in a blighted area to lose health fast, which works well against groups.

The ability to passively reload when holstered allows you to swap out to use another weapon and return to it afterward, perfect for picking out enemies that are alone to save ammo.