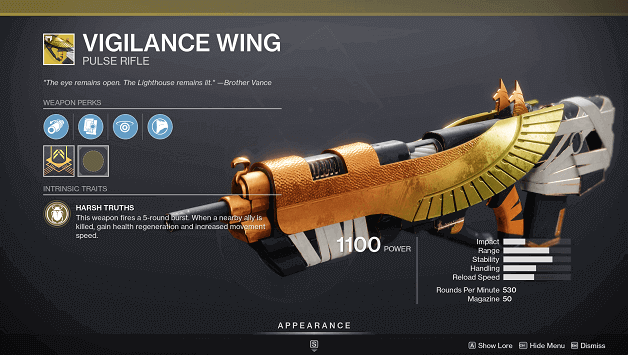 The Vigilance Wing is an Exotic Pulse Rifle that is capable of dealing large amounts of damage with multiple burst shots.

This Exotic Pulse rifle is capable of firing 530 rounds per minute and has a magazine capacity of 50 rounds.

Players use this weapon because of its unique 5-round burst which rewards accurate shooters with high amounts of focused damage.

How To Get Vigilance Wing?

You may obtain Vigilance Wing from the following sources:

The Vigilance Wing reloads faster when its magazine is empty.

Improved weapon performance and greatly increased recovery when its wielder is the last living member of a fireteam.

This Vigilance Wing has a versatile dual-purpose stock.

This weapon fires a 5-round burst. When a nearby ally is killed, gain health regeneration and increased movement speed.

The multiple burst fire feature allows you to easily pin multiple shots on a target, which is extremely good for making precision shots for more damage.

Harsh Truths is excellent for holding on to missions when your allies are killed, providing you with bonus health regeneration and movement speed until they are alive again.

How to Get Vigilance Wing Catalyst?

The Full Auto Trigger System perk allows you to fire the Vigilance wing at full auto when you are holding down the trigger.

This allows you to release shots with a faster fire rate, making it easier to unleash ammo when you need to deal tons of damage in seconds.

You can unlock the Full Auto Trigger system by unlocking the Vigilance Wing Catalyst, which can first be obtained by defeating Guardians in the Crucible.

Blood for Blood medals is earned by defeating opponents who recently defeated an ally.

The Vigilance Wing is a weapon that can be very powerful in the hands of the player who tends to get precision shots.

This is because of the 5-round burst that makes it easy to unleash shots quickly when aiming at a specific target.

The Harsh Truths perk gives you an opportunity to rescue allies who are near death (after one or more have died) and allow them to fight off enemies better while waiting for them to respawn.