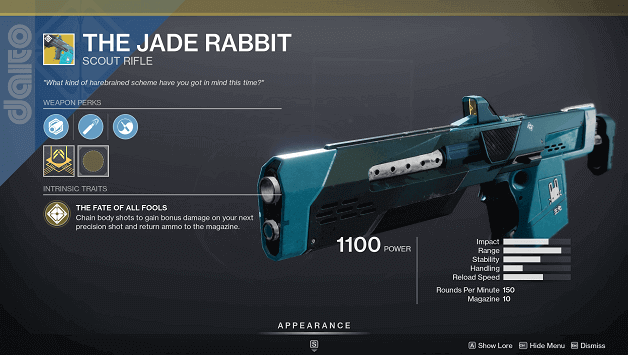 “What kind of harebrained scheme have you got in mind this time?”

The Jade Rabbit is an Exotic Scout Rifle which is a great choice of weapons for those who take precise hits at enemies after one or two shots. This weapon is capable of firing up to 15o rounds per minute and can fire 10 rounds before the need to reload.

Players utilize this weapon by stacking damage from body shots and dealing it as bonus damage when their target is vulnerable to a precision shot.

How To Get The Jade Rabbit?

You can get The Jade Rabbit from opening Exotic Engrams, which can drop when you defeat enemies or complete missions.

This weapon can also be acquired from Powerful Engrams which can be rewarded for completing weekly milestones. 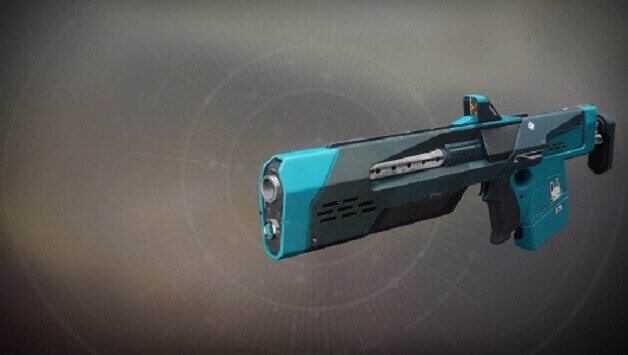 The Jade Rabbit’s barrel is optimized for recoil reduction.

Shots fired from The Jade Rabbit knock the target back farther.

Causing damage with The Jade Rabbit increases its stability.

The Fate of All Fools

Chain body shots to gain bonus damage on your next precision shot and return ammo to the magazine.

This allows you to deal bonus damage to enemies when you hit their bodies first before dealing a precision shot.

Aside from dealing more damage after chaining attacks and dealing a precision shot, you will also restore ammo to your magazine without reloading.

This is perfect for when you are in fast-paced combat and need to pick a few body shots to stop your enemy in their tracks, allowing you to finish them off with a precision shot.

How to Get The Jade Rabbit Catalyst?

The Jade Rabbit’s catalyst increases the weapon’s stability by 27, which improves the handling of the weapon, so your shots are more accurate. This makes it easier for you to get those precision hits after you have successfully stacked damage with body shots.

You may obtain The Jade Rabbit catalyst by defeating other Guardians in the Crucible. It’s not required for you to win a Crucible match. Just by participating in the match and getting the kills will help you to get this Catalyst.

The Jade Rabbit catalyst may be unlocked by defeating 250 Guardians when participating in the Crucible with the weapon equipped.

Like most Scout Rifles, The Jade Rabbit has a good amount of stopping power, which you can use to shoot the bodies of enemies to disable them for a bit.

Enemies that flinch or that are weakened are easier to deal with precision shots too, which makes this a perfect technique for The Jade Rabbit.

Each shot with a weapon that causes damage will increase The Jade Rabbit’s stability, making it even easier to hit the right spots as you continuously attack enemies.