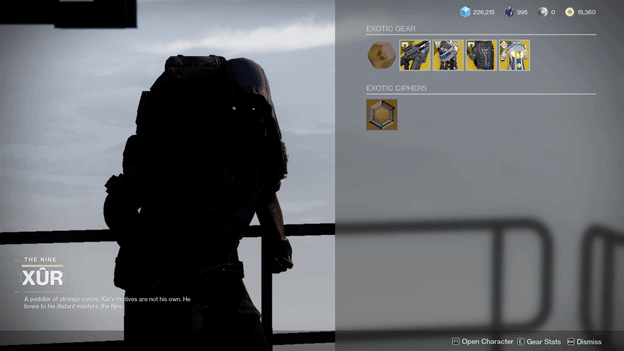 In most games, there is always a strange vendor or character that helps players get rarer items to help them become stronger.

Destiny 2 has such an NPC, known as Xur Agent of The Nine, this character is a source for how to get Exotic gear.

Xur Exotic engram trading can be done once you find him but he is only available for a specific amount of time at a certain location, which rotates every week.

Xur, Agent of the Nine is a dark-figured NPC in Destiny 2 who appears in a specific “Xur Location”, which there are many of each week.

His purpose in Destiny 2 is to act as a mysterious merchant who can provide players with Exotic gear that they can use to boost their arsenal.

The location of Xur resets every week and he is mainly available over the weekend in one of his common locations that can be found in the Tower.

Players may purchase Exotic items from Xur in the form of a randomized piece of gear through an Exotic Engram or a specific gear that is displayed weekly on Xur’s screen.

What Does Xur Sell? 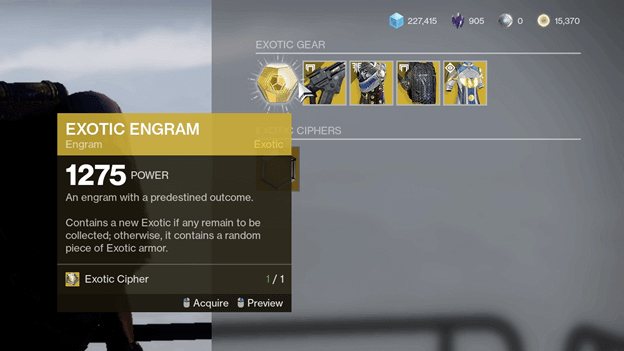 Players can acquire Exotic gear from Xur, this makes him the go-to NPC for when players want a huge boost with their character.

Getting a single Exotic item from Xur may be the small boost players need and can eventually change their whole build to make them stronger.

The Exotic Engram costs an Exotic Cipher while the other gear can be purchased with a small number of Legendary Shards.

The following can be purchased from Xur:

An Exotic Engram will provide players with a random Exotic which will mainly be one that you do not already have.

If you already have all of the Exotic items, it will instead grant you a random piece of Exotic armor, which has a random set of stats.

To purchase an Exotic Engram, you will need an Exotic Cipher (available from rewards or Xur Quest) unlike the other items which can be bought with Legendary Shards.

Xur may sell a specific weapon that can be purchased for a small number of Legendary Shards, which usually cost around 20 to 50 at most.

The Exotic weapon is usable by all of your characters regardless of class and can be stored in your vault for transferring later on.

There will be Exotic armor available for you to purchase which has a piece for each class and can be a random part.

These may only be used by their specific class but you can purchase them and store them in your vault which allows you to collect them with your other characters. 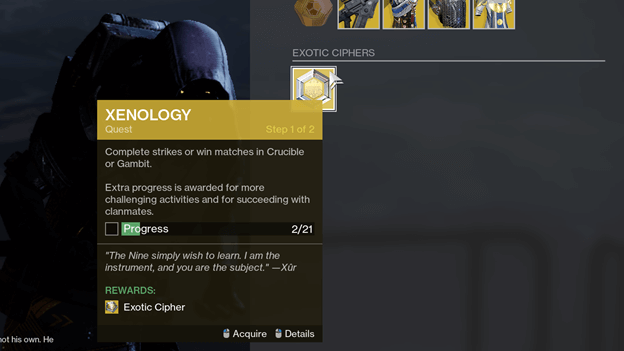 There is a quest available when you visit Xur which is called the Xenology quest, and you can use this to obtain an Exotic Cipher from Xur.

An Exotic Cipher is required to purchase Exotic Engrams and is very rare to obtain, but Xur provides you with a quest to get it.

The Xenology quest can be acquired from Xur and completed to reward players with an Exotic Cipher (only one may be held at a time) which they can use to buy a random Exotic from Xur.

It is possible to purchase a specific Exotic item from the Monument to Lost Lights at the Tower, which has a collection of past Exotics from previous DLCs.

For a guide on the Xenology quest, check out our Destiny 2 Xenology Quest Walkthrough.

When Does Xur Come?

Xur arrives every weekend and will be available until the week resets, making him present for only 3 days before disappearing again.

Players will need to search each Xur location to figure out where he currently is, luckily, he only appears in 5 different locations.

Once Xur has arrived, he will remain in that location until the Xur reset (when the weekend ends and he disappears) and players will need to wait for the next weekend for his next appearance.

Xur is an NPC who can be found in the tower every week on the weekends, who sell Exotics for either Exotic Ciphers or Legendary Shards.

Players can only gain access to Xur on the weekends and once these are over, Xur will be gone and will appear once again the next weekend.

Every week, Xur will be selling different Exotic items that have different stat roles, making it quite a challenge to get the perfect gear right away.

You should save up on Legendary Shards when you can just in case you want to buy stuff from Xur later on when he arrives.