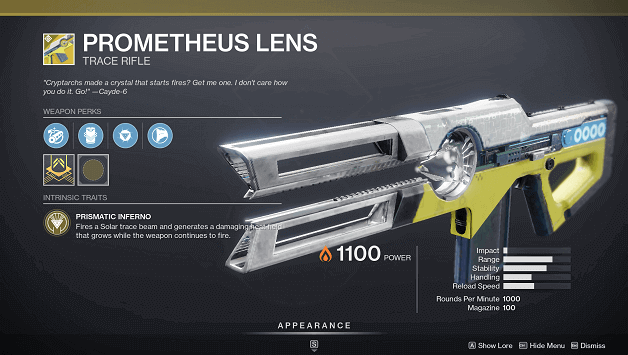 “Cryptarchs made a crystal that starts fires? Get me one. I don’t care how you do it. Go!” –Cayde-6

Imagine having the power of the sun within your hands, the Prometheus Lens is capable of that exact feeling, burning enemies with a powerful Solar trace beam.

This Exotic Trace Rifle is capable of unleashing a beam that consumes 1000 rounds per minute with a magazine size of 100.

The longer you fire this weapon at enemies, the more damage it deals while also dealing damage in an area due to its Prismatic Inferno trait.

How To Get Prometheus Lens?

You may obtain Prometheus Lens from the following sources:

The Prometheus Lens has a stable barrel attachment.

Distance optimizations have been made to the Prometheus Lens.

Kills with the Prometheus Lens return a fraction of the ammo used to the magazine from reserves, extending the beam’s duration.

Fires a Solar trace beam and generates a damaging heat field that grows while the weapon continues to fire.

This allows you to continue dealing increased damage to enemies while also gaining an area-of-effect attack to damage nearby enemies.

More damage is dealt while you continuously fire this weapon and with the Flame Refraction trait, ammo from reserves is added to the magazine when enemies are killed.

How To Get Prometheus Lens Catalyst?

This makes it easier to continuously focus the Solar beam on enemies to maximize the amount of damage done and to avoid wasting ammo.

You may obtain the Prometheus Catalyst by completing Strikes on the Heroic or Nightfall difficulty and unlock it by defeating 500 enemies with the Exotic Trace Rifle.

The Prometheus Lens melts through enemies like a laser through butter, melting their health in seconds while also affecting nearby enemies.

It is ideal to keep this weapon firing as long as you can when there are multiple enemies present to make use of the Prismatic Inferno ability, which is great for taking out-groups.

Aiming with the Prometheus Lens becomes easier once you obtain and unlock its catalyst, making the weapon extremely accurate.