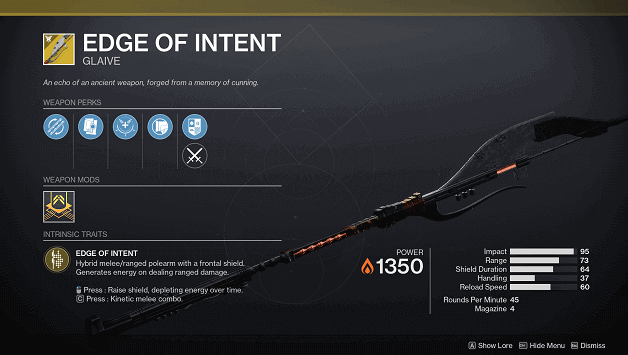 An echo of an ancient weapon, forged from a memory of cunning.

The Edge of Intent is an Exotic Glaive meant to be used by the Warlock Class, which contains restorative properties.

With this Exotic Glaive, you can fire 45 rounds per minute with a magazine that is limited by 4 rounds before reloading.

This Exotic Glave is capable of generating energy which may then be consumed to deploy a healing turret.

How To Get Edge of Intent?

The Edge of Intent is obtained by crafting it via the Relic (Resonance Engine) which can be found at the Enclave on Mars within the Relic Room.

This will require that you have unlocked its pattern and that you are using the Warlock class to craft the Exotic Glaive.

The Edge of Intent reloads faster when its magazine is empty.

When Edge of Intent’s energy is full, you may consume it before firing to make your next shot deploy a healing turret on impact.

This stock makes Edge of Intent stable but heavy.

This Exotic hybrid melee/ranged polearm has a frontal shield and will generate energy when damage is dealt with in its attacks.

You can consume the energy that is generated from its attacks to charge your next shot with the ability to deploy a healing turret.

This can be done thanks to the Restorative Turret trait, which can be activated to cause the next attack to deploy the healing turret.

It seems there is currently no slot for a catalyst upgrade with the Edge of Intent and by the looks of it, there may not be one.

The Edge of Intent is a very powerful Glaive, having one of the highest damages that exists amongst all of the Exotic Glaives.

Thanks to the healing turret, you can modify your build and choose to have Healing Rift for more healing or Empowering Rift for damage since you can heal with Restorative Turret.

A good way to eliminate enemies easily would be to deal with continuous shots and release the Lightning Seeker attack when possible.