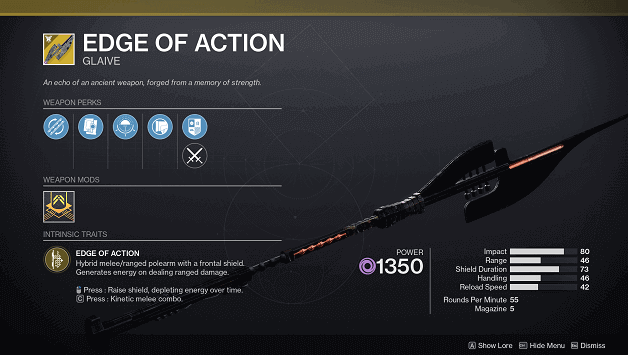 An echo of an ancient weapon, forged from a memory of strength.

The Edge of Action is an Exotic Glaive meant to be used by the Titan Class, which contains protective properties.

This Exotic Glaive is capable of unleashing 55 rounds per minute and has a magazine capacity that holds 5 shots.

Using the Edge of Action will allow its user to deploy a protective shield after consuming energy generated dealing ranged damage.

How To Get Edge of Action?

You can obtain the Edge of Action by crafting it at the Relic (Resonance Engine) located at The Enclave on Mars.

This will require that you have unlocked its pattern and that you are using the Titan class to craft the Exotic Glaive.

When weapon energy is full, consume it before firing to make your next shot deploy a protective shield on impact.

This stock makes Edge of Action stable but heavy.

The Edge of Action is a Hybrid melee/ranged polearm with a frontal shield that generates energy on dealing ranged damage.

The frontal shield can provide a good defense against attacks and the ranged attacks of this Exotic Glaive generate energy.

You can consume the energy generated to cause your next attack to release a protective shield to further protect you and your allies.

The Edge of Action seems to be missing a catalyst slot and it may be safe to say that it currently has no unlockable catalyst.

The Edge of Action is capable of dealing with high amounts of damage due to its high impact at the cost of a slightly reduced magazine size.

Its ability to deploy a shield after consuming energy makes it a great weapon to help teams survive dangerous situations.

This Exotic Glaive is perfect for Titans who love to charge into action as it allows both survivability and damage.