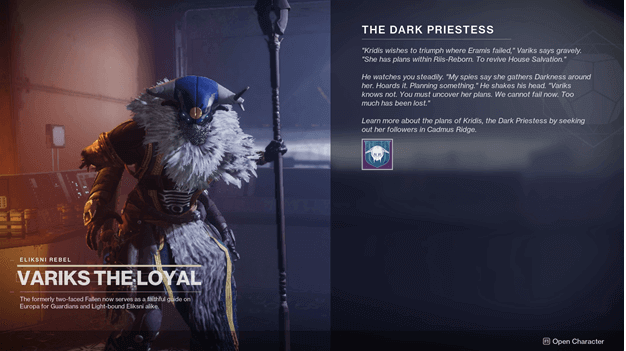 This quest will be available if you have already completed Empire’s Fall and can be received by speaking with Variks at his hideout in Charon’s Crossing.

Kridis intends to revive House Salvation and you are the only one who can come in between her plans and make an attempt to stop her. 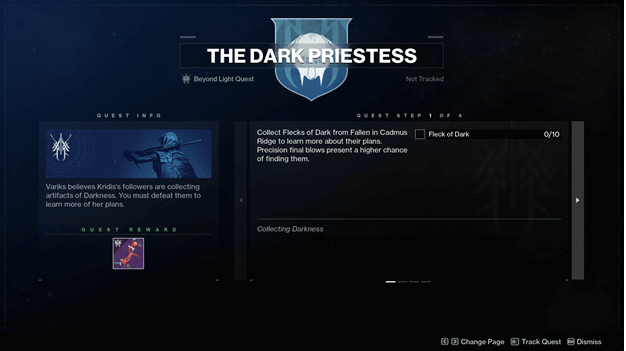 Variks believes that Kridis has sent her Fallen to obtain Dark and wants you to intervene by defeating them and taking the Flecks of Dark.

Enemies in the Cadmus Ridge have a chance to drop a Fleck of Dark when killed and you will need to obtain 10 in total.

It appears that some of the Eliksni do not want to follow Kridis and these survivors have become targets of House Salvation.

You will need to head over to defend the Skiff and assist with its evacuation before the Fallen destroy what is left of them.

There will be 3 Field Emitters in the area and you will have to shut all of them down one by one, which is done by tampering, obtaining a code, and disengaging the emitter.

Each Field Emitter requires you to:

You will need to repeat these steps for each of the Field Emitters. (total of three)

The next part of the quest is to complete “The Dark Priestess” Empire Hunt, if you remember from the main Beyond Light campaign, you may have had to do Empire Hunts before.

You will find the Empire Hunt in the same area where the Allied Skiff has escaped and may begin the mission right away.

For a guide on this mission, check out our Destiny 2 The Dark Priestess Empire Hunt Walkthrough.

After completing the previous mission, head back to Charon’s Crossing and go to Variks’ hideout to speak with him.

This will complete the mission and you will also be rewarded with the Biting Winds Legendary Combat Bow and also will have unlocked the Old Secrets, New Challenges quest.