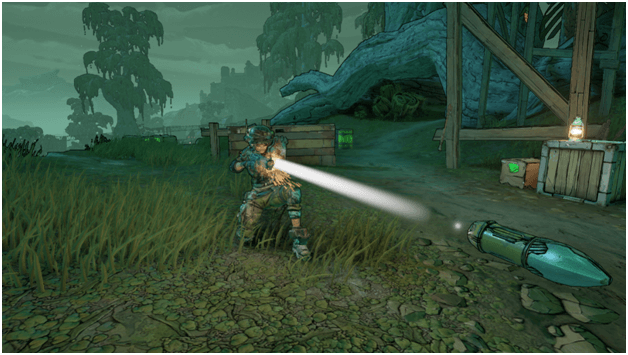 The Gunner, Moze is a ex-military specialist who never leaves home without her trusty Iron Bear, a mechanical suit that she uses when fighting her enemies.

She specializes in dealing high amounts of damage done by firing off several rounds, making use of fiery munitions and explosive damage along with the survivability provided by her high amount of shields and resistances. 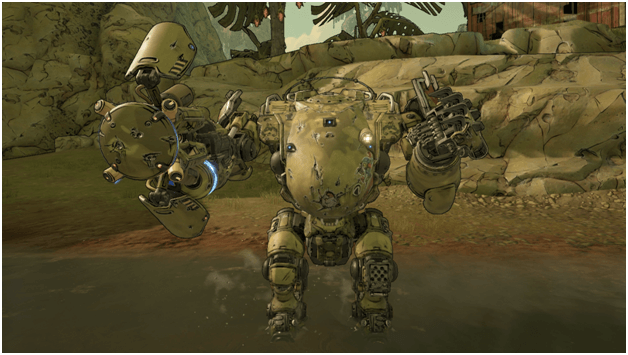 Moze is different from other characters and instead of having abilities to use, she can summon her Iron Bear suit for her to use.

The Iron Bear is affected by several of Moze’s passive skills and can be improved along with Moze to either be used offensively or defensively based on the player’s preference.

Summoning Iron Bear will cause an animation to play which will prevent Moze from taking any damage, allowing this to save her life at certain time and upon entering Iron Bear, the mechanical suit itself will take damage instead of Moze.

While inside Iron Bear, Moze will regenerate anything that her stats are set to allow her to regenerate which can make using Iron Bear not only offensive or defensive but also situational at times. 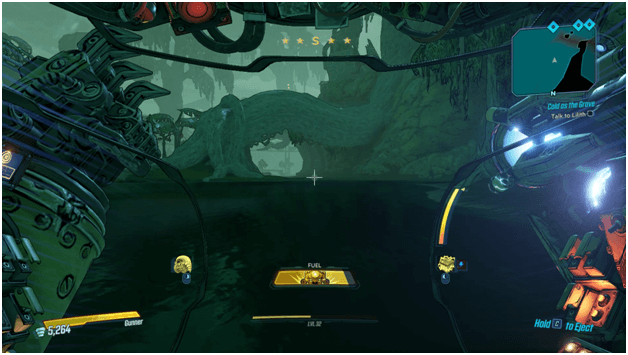 Replacing the option of having different active skills to use, Iron Bear instead can be modified to have two attacks which can be selected similar to how skills would be selected.

These can be either different or the same weapons and one can be selected for each hand and can be used with the primary fire button as well as the aim button if basic keys are set.

The Iron Bear has a total of 6 different weapons which all can be modified to add up to different strategies depending on how the user prefers to fight.

Using weapons or being active in Iron Bear will drain its fuel which is pretty much the same as its cooldown so its wise to be more accurate than reckless to be able to stay inside longer. 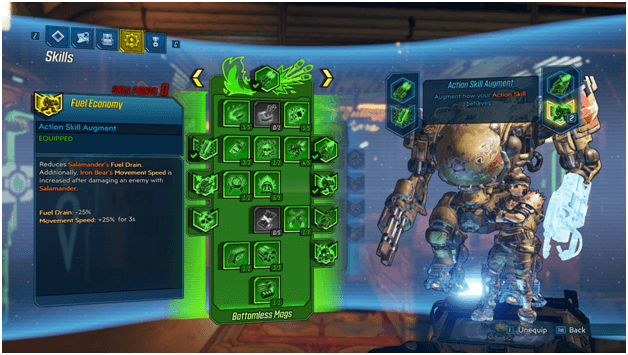 The Bottomless Mags tree focuses mainly on the ammo efficiency of Moze and includes the Minigun and Salamander weapons for Iron Bear. 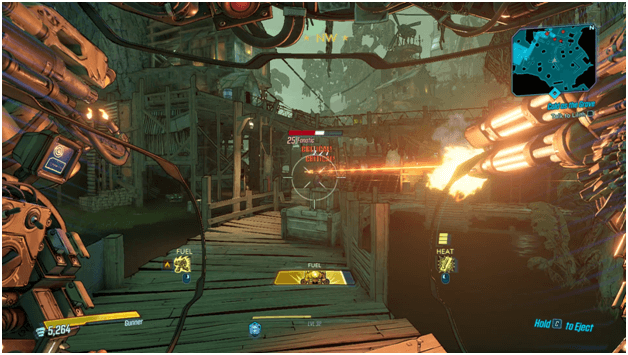 The Minigun fires several bullets in a small amount of time which can easily shred enemies apart from different ranges.

Heat will generate when the Minigun is fired and if the maximum amount is reached, the Minigun will need to cooldown for a short period of time. 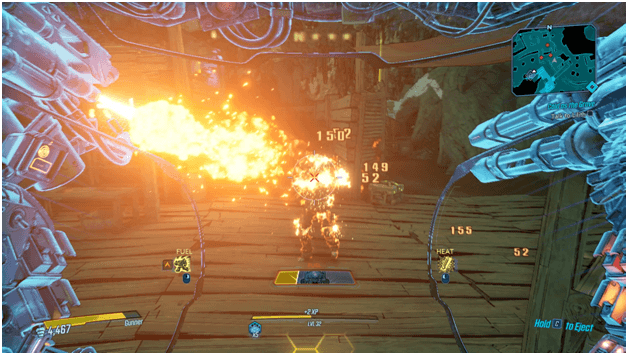 The Salamander is a flamethrower which fires out a continuous flame that damages and sets enemies on fire, dealing both initial damage and damage over time.

Using the Salamander is best for close range and works well against enemies that are flesh type in terms of defenses. 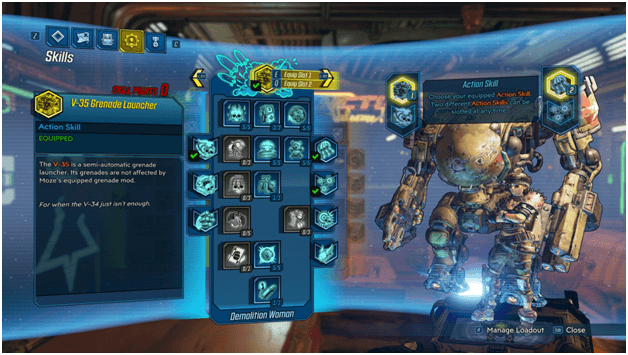 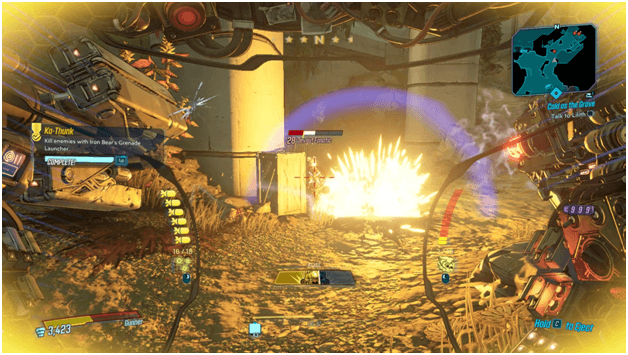 The V-35 Grenade Launcher fires grenades rounds at enemies that will either explode upon impact with an enemy or after a short timer after landing on the ground.

With a magazine size of 15, the V-35 Grenade Launcher will need to reload until being able to fire more rounds and will fire one at a time unless modified to burst-fire. 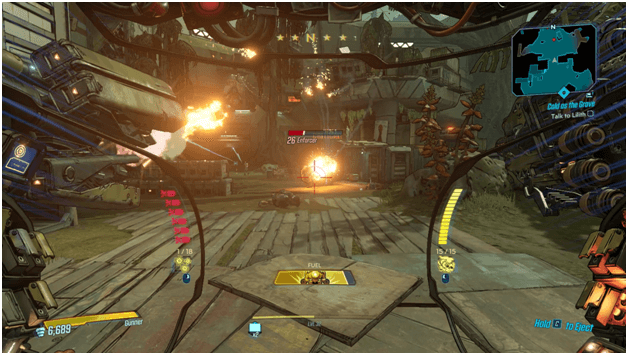 The Vanquisher Rocket pod can fire multiple rockets out which are initially unguided but can later on be modified to have locking feature, increased rockets or higher amounts of damage.

Rockets from The Vanquisher Rocket pod may reach a good distance and will explode and deal an amount of damage upon impact, capable of bombarding several enemies. 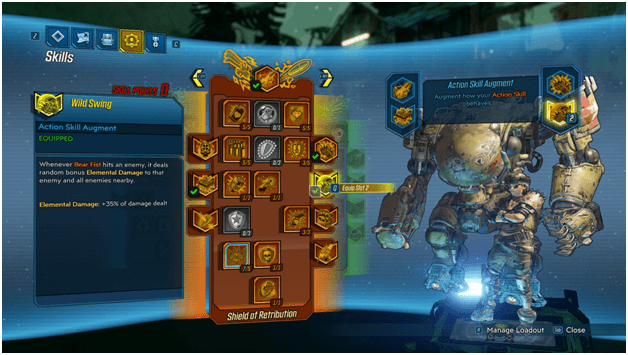 The Shield Of Retribution skill tree focuses on high amounts of damage and with Moze possessing a high shield for defense which provides Iron Bear with the Railgun and Bear Fist weapons. 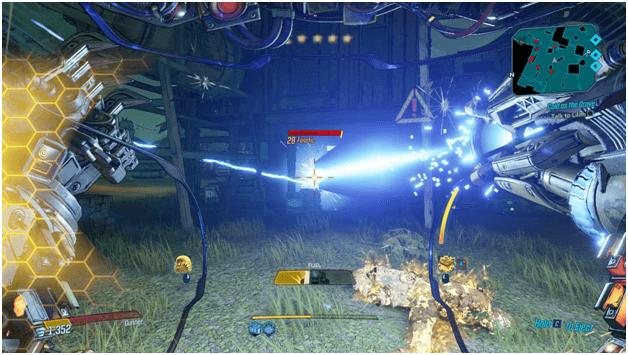 The Railgun initially fires off a high precision projectile that initially is electricity based but can later on be modified to alter both the fire rate and element of the projectile.

The Projectile fired from the Railgun is capable of hitting multiple enemies and can be modified to either weaken them or cause chain effects. 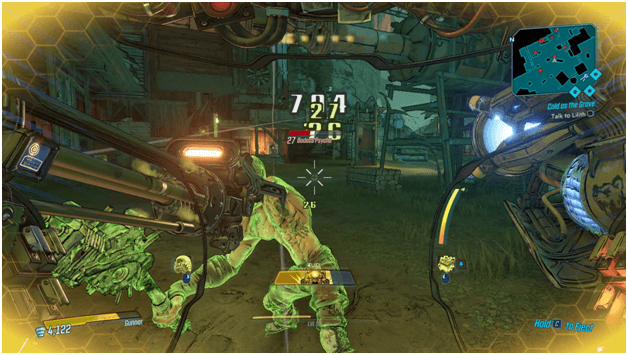 Unlike Iron Bear’s other weapons, the Bear Fist provides it with the capability of dealing a melee attack which strikes an enemy in front of hit.

This can later be modified to deal bonus damage or even to be able to hook enemies and pull them back to Iron Bear depending on the selected augments. 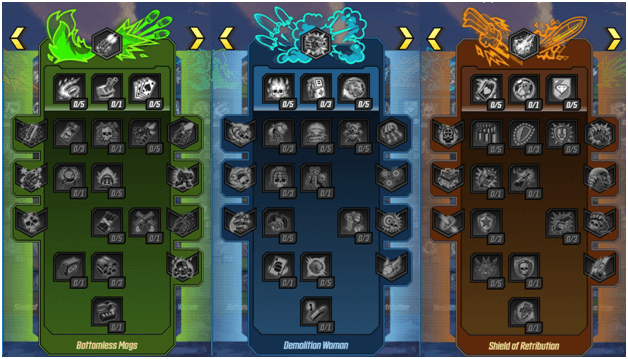 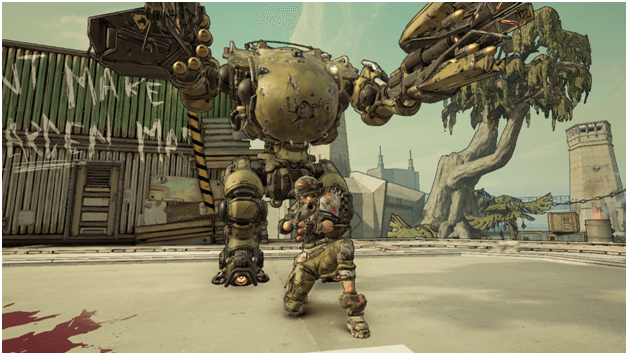 Moze is a very durable character, despite having abilities that can inflict self-harm due to explosions or health draining passive skills and her builds guarantee successive hits against enemies as well as high amounts of damage.

The usage of Iron Bear can immediately change situations to suit her favor and she may use both her passive skills to empower herself or her Iron Bear to destroy her enemies while remaining safe inside until the moment comes for her to unleash devastation on her own.