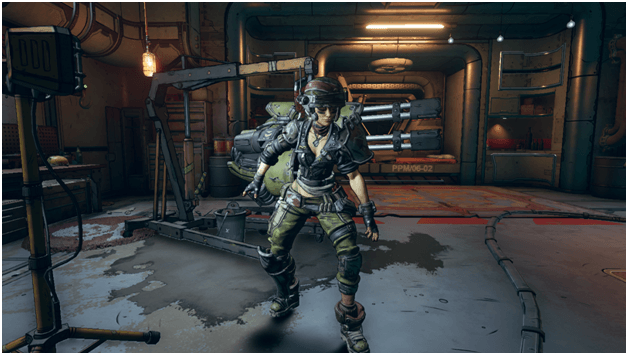 The Gunner, Moze is a veteran who uses basic instincts as a soldier along with the aid of her Iron Bear mechanical suit to shred and blast her enemies to bits.

Moze is capable of taking up a lot of damage with her high shields and her Iron Bear which she uses in combat, allowing her to let off several rounds and cause a lot of explosive damage either alone or inside her Iron Bear. 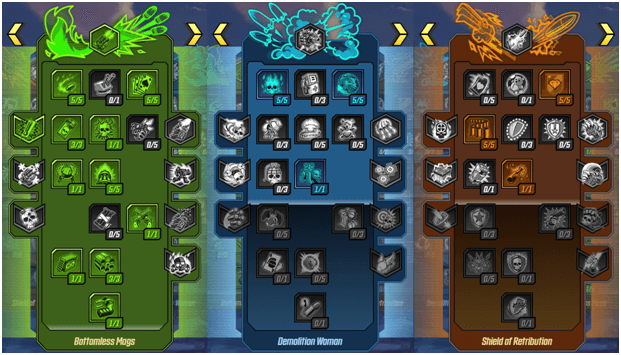 The Bottomless Mags build aims to allow Moze to dish out a lot of damage by increasing gun damage along with an addition in incendiary damage with a large stock of ammunition behind her.

Cloud Of Lead allows Moze to deal additional incendiary damage while also saving ammo every few shots that she takes, this applies to Iron Bear as well.

Matched set gives Moze a higher magazine capacity as well as a decreased amount of heat gain when using Iron Bear, making this effective for those who use weapons from the same manufacturer.

Adding Redistribution to the build will help Moze keep a stable supply of ammunition every now and then as long as she scores critical hits, allowing her ammunition to regenerate.

Rushin’ Offensive is great for those who want to remain mobile as it allows Moze to fire her guns and sprint at the same time, giving both offense and mobility when fighting enemies.

Since Moze will have an increase in her ammunition efficiency, Raging RPM’s gives her a good boost in critical damage as well as an increased fire rate.

Specialist Bear is a great passive for dual weapons for Iron Bear and can help it do a lot of damage when using two of the same type of weapon.

Some For The Road is pretty much a very overpowered passive, granting Moze infinite ammo for a short amount of time after exiting Iron Bear.

Utilizing the Click, Click passive gives a large bonus in damage when Moze is running low on ammunition which works pretty well with weapons that have a small magazine capacity and high damage.

Forge is a great way to sustain ammunition, regenerating ammo for Moze continuously by a certain percent.

For this build we aim to use two of the same weapons for Iron Bear since we have the Specialist Bear passive learned.

This allows us to deal an extra 25% damage with the weapons as long as you use the same for each hand.

A good choice for constant damage since Cloud Of Lead is learned would be to use two miniguns but this can also be swapped for Salamander if you plan to get close up and personal when in Iron Bear. 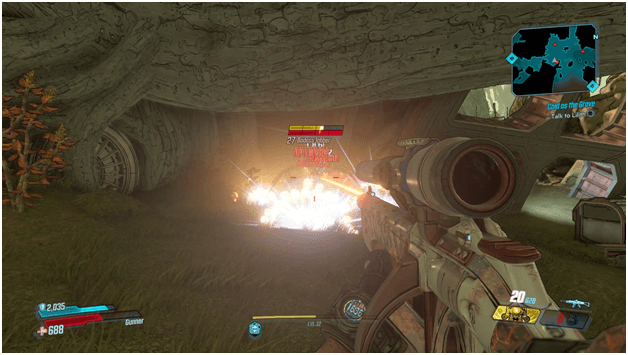 Since the skill tree is made also has ways to sustain ammo, Moze can deal successive shots and high amounts of damage over time.

Having weapons of the same manufacturer provides a huge boost to this build as it increases her magazine size as it reduces the heat per shot when using Iron Bear. 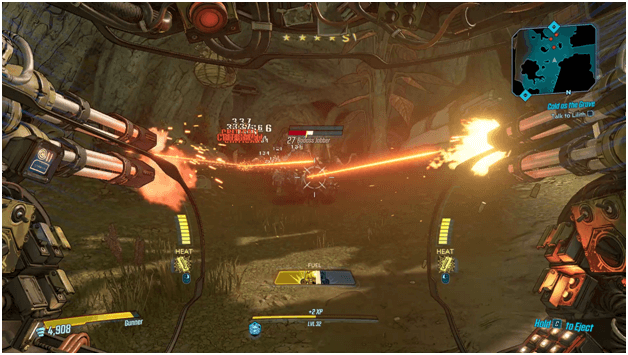 Iron Bear also benefits from some of Moze’s passive skills and will end up dealing a sufficient amount of damage when used.

It is recommended to use either two Salamander or Minigun weapons for the 25% boost from Specialist bear. 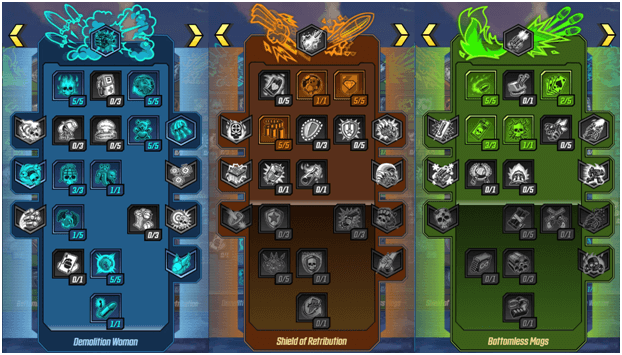 The Demolition Build is good for those who like to blow things up and cause area of effect damage along with even more incendiary damage.

Fire In The Skag den adds an amount of damage, totaling up to 15% additional incendiary damage at max level to splash damage dealt by Moze.

Grizzled is very helpful as it reduces the action skill cooldown of Moze, allowing you to use Iron Bear more often than you normal would be able to.

Stainless Steal bear gives you more fuel with Iron Bear allowing you to use it longer as well as more armor for its survivability.

Pull The Holy Pin allows Moze’s grenades to deal critical damage, giving a large boost in damage when you get lucky with a critical hit.

Moze can exit Iron Bear and have it still active to fight alongside her when the Auto Bear passive is learned, allowing the Iron Bear to distract and deal damage to enemies.

Vampyr allows Moze to regain health when hitting enemies with grenades which can prove to be quite helpful for surviving fights against large amounts of enemies.

Explosive Punctuations further allows her to make more use of her action skill as it increases it cooldown rate when she deals splash damage, making it cooldown faster as long as she keeps dealing splash damage.

Short Fuse adds a lot of damage per second to Moze’s attacks and helps clear out enemies fast since it gives a chance which pretty much always triggers, to deal extra explosive damage to enemies when firing her weapons.

For this build we use one of each weapon from the Demolition Woman skill tree as they go hand in hand when dealing with enemies, especially when there are several of them present.

The V-35 Grenade Launcher acts as a constant source of damage while in Iron Bear which we use the Musical Chairs augment with.

Using the Musical Chairs augment allows every 7th grenade to be a singularity grenade which pulls in enemies, bringing them closer for a massive attack.

We equip the Vanquisher Rocket Pod weapon on the other hand and modify it by using the Hammerdown Protocol augment for massive damage.

Using the Hammerdown Protocol augment allows the Vanquisher Rocket Pod to fire of a nuke instead of a barrage of rockets, dealing a very large amount of damage to enemies in an area.

With the combination of the V-35 Grenade Launcher dealing constant damage and pulling enemies in one location every now and then, we deal a large amount of damage to them with a shot from the Vanquisher Rocket Pod with its Hammerdown Protocol augment to fire a nuke to the gathered enemies. 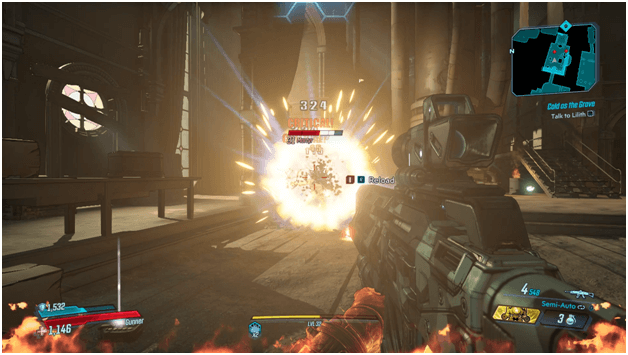 Using this build can give off a large amount of damage, making Moze’s great for getting rid of mobs of enemies with her high damage along with explosive bonuses.

Several weapons can be used and those that fire in quick succession can really deal a lot of area damage while those that have slow firing are still capable of good amounts of high area damage. 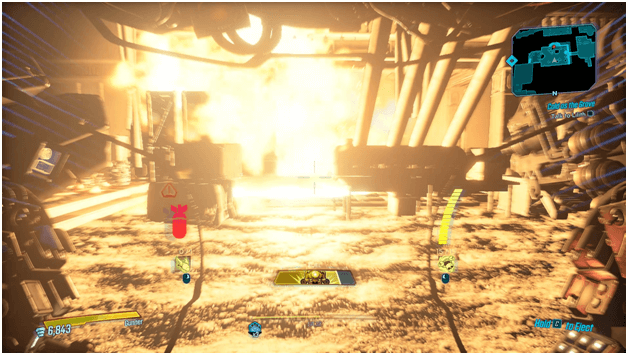 This provides you with a huge amount of damage and you can pretty much clear large amounts of enemies within mere seconds. 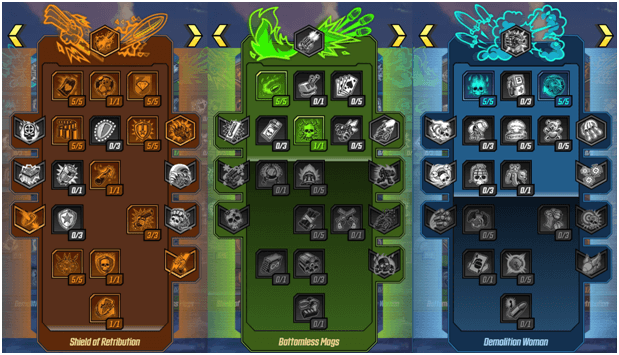 The Shield Of Retribution build is a build that focuses on survivability through high shields as well as increased gun damage.

Selfless Vengeance is a great way of increasing damage at the cost of health which is covered well since this build end up with Moze having a high amount of shields to make up for the health drain.

Armored Infantry increases Moze’s gun damage along with an increase in damage resistance to further bolster her survivability as long as her shields are active.

Drowning In Brass increases the damage that Moze can deal when she kills and enemy at the cost of a small amount of fire rate but since most guns later on fire pretty quick, this becomes acceptable.

To further increase the amount of damage that Moze can take head on, Vladof Ingenuity is added to the build for both and increase in maximum shields as well as shock resistance to reduce extra damage taken.

Desperate Measure increases Moze’s damage based on how low her health is and with the usage of Selfless Vengeance, her health can remain pretty low guaranteeing that it remains active for a lot of damage.

The Phalanx Doctrine skill is probably one of the strongest passives there is in the game, additional max shields and gun damage for a period of time every time an enemy is kill which has no stacking limit.

Force Feedback is a great way for Moze to keep her up as it causes her shields to start regenerating the moment she scores a critical kill.

Most of the time spent is using Moze during this build but with we also use Iron Bear to deal a pretty good deal of damage equipped with Railgun and the Bear Fist weapon.

We modify the Railgun weapon with the Corrosive Sabot Round to deal corrosive type damage and for quicker shots to be fired while Bear Fist is modified with the Shock Hammer augment for quick melee hits and electrical damage.

The combination of the too provide extra damage over time and can deal good amounts of damage to enemies with shield or high armor. 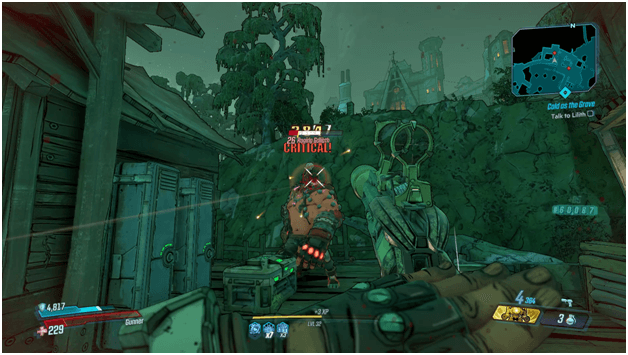 This build adds up several passives to gain an increase in damage at the cost of lower health but the high shields make up for the lack of health.

Moze will basically be able to keep moving around, killing enemies and increase her damage continuously until she gets rid of all enemies.

Using this build is one of the best ways to take on several groups of enemies regardless of what weapon you are using. 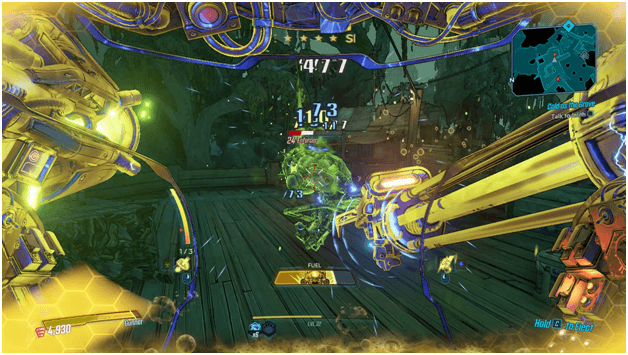 In the event that you take unsuspected high amounts of damage, you can instantly summon Iron Bear to allow your shields some time to regenerate and to deal damage while inside it.

Using Iron Bear strategically to save Moze from getting downed as well as to deal large amounts of damage to enemies with heavy armor or high shields can change the outcome of a fight severely. 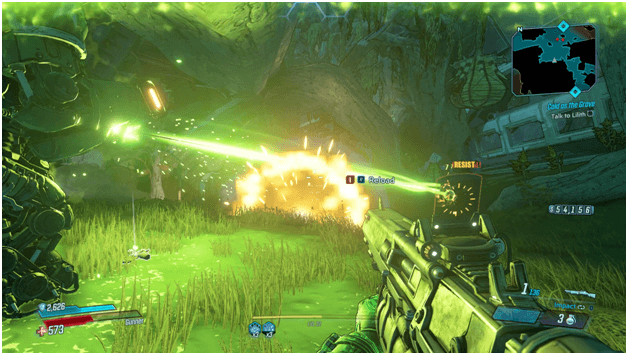 Moze has a bunch of weapons that she may use to kill her enemies with and each weapon or set of weapons can be used strategically to match different builds.

She excels greatly at dealing high amounts of damage and deals even more with the help of her incendiary attacks.

At earlier level she may appear to be a bit easy to bring down but once she reaches higher levels, she remains to be one of the best characters that can take a lot of damage and take on several enemies with ease.