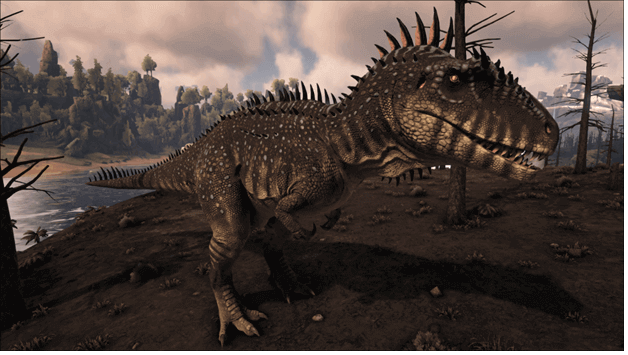 If you thought the Giganotosaurus was the only larger threat to most creatures in Ark, make way for the Carcharodontosaurus.

The Carcharodontosaurus is a newly added massively large predator that is capable of chewing its way through dozens of creatures and players in seconds.

What it lacks in overall damage, which is still pretty high, it makes up for with its health, agility, and ability to continuously attack victims. 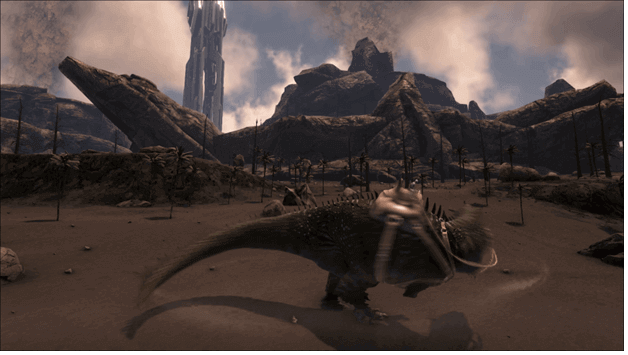 The Carcharodontosaurus is so massive that it can produce a huge amount of force and swing its tails at enemies to send them flying.

Not only does this work on medium and smaller-sized creatures, but it also tends to work on larger ones as well and can even send a Rex flying.

This ability is perfect for pushing back multiple enemies when you are defending an area and can cause serious trouble to enemies who try to raid your base.

Being not only a good offensive tame, but the Carcharodontosaurus also has the ability to bolster its allies in battle by unleashing a roar.

Killing enemies will build up charges which will stack and once it roars, the boost will be efficient based on how many charges it has.

With its extremely sharp teeth, the Carcharodontosaurus can rip through enemies and cause a debuff that reduces the effectiveness of their healing.

This will make it difficult for your enemies to recover while in battle and will make them easier to kill when you are fighting them.

Enemies that are bitten by the Carcharodontosaurus will have the Shredded buff applied to them for 8 seconds.

Whenever the Carcharodontosaurus kills an enemy, it will gain the Killing Frenzy buff, providing it with increased speed and immunity to stuns.

This makes this beast unstoppable and will allow you to catch up to any prey and deal more damage to large groups of enemies.

With immunity to stun, you won’t be bothered by pesky attacks that other helpless enemies try to disable you with.

You will know this ability is active when its eyes are glowing and its slow movement will be changed to a horrifying sprinting animation.

After killing an enemy, the Carcharodontosaurus will be seen with blood dripping out of its mouth as if it has just had a tasty snack.

The Bloodrage buff is applied and provides the Carcharodontosaurus with increased health regeneration as well as a boost in its damage.

This makes the Carcharodontosaurus an unstoppable force that can quickly eat its way through an army of enemies that try to stop it.

The Carcharodontosaurus Saddle is equipped with a minigun which players can use while riding, allowing them to shoot enemies, even while moving.

Getting around the map is easy thanks to the Carcharodontosaurus’ speed along with its charge to get through obstacles blocking its path and its ability to jump.

A Carcharodontosaurus is perfect for escorting other allies since it can easily move around and cover the area for them with its minigun.

Being able to get around quickly and having a minigun for protection makes the Carcharodontosaurus a good means of transport for players.

How to Tame Carcharodontosaurus

Taming the Carcharodontosaurus can be rather tricky at first as it has a combination of what would appear to be the trapping of a Giganotosaurus and the taming style of a Fjordhawk.

You can tame this beast by feeding it the corpse of another creature, which will be more efficient if it’s a larger creature such as a Rex or Wyvern.

To do this, you will first need to trap the Carcharodontosaurus to make sure it doesn’t escape or chase after other creatures by trapping it with Metal Dinosaur Gateframes. (Stone will do but it’s risky) 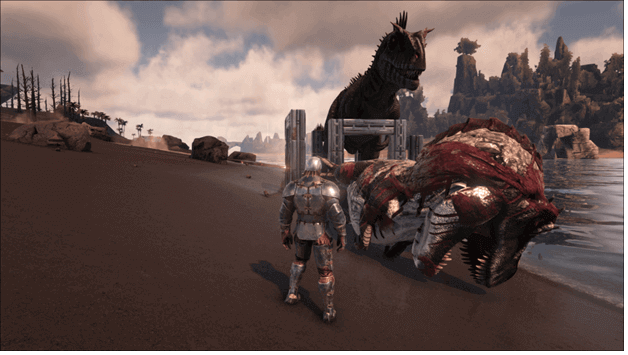 Trapping it in Dinosaur Gate frames can be done by placing them to be spread out as if you were making a square but only 3 of first so it can get inside.

You will need to place a Large Bear Trap in the center to make sure it gets stuck and once it does, rush over to place the last Dinosaur Gateframe to trap it.

Once you have trapped the monster, you will need to break a dead body to it for it to eat or you can whistle or ride a tame to let it kill and it eats.

Depending on what corpse it has eaten, the taming progress for the Carcharodontosaurus will increase and you will need to repeat this until it is tamed.

What Does Carcharodontosaurus Eat

The Carcharodontosaurus is a carnivorous predator and its hunger will only be sated when it eats meat of any kind.

The Carcharodontosaurus Saddle is known ingame simply as a Carcharo Saddle and can be crafted at a Smithy.

You can have a male and female Carcharodontosaurus breed which results in the female dropping a Fertilized Carcharodontosaurus Egg. The egg may be distinguished by its large size and its brown color covered in lighter brown spots with a red glow if fertilized.

You will be able to find the Carcharodontosaurus on some of the maps and it will mostly be around mountains or hot areas.

The Carcharodontosaurus shares some spawn locations with the Giganotosaurus and will sometimes replace it, causing either it or a Giga to spawn.

You can find the Carchoradontosaurus mostly around the edges of the Snow Dome.

The Carcharodontosaurus can be found around Wanderer’s hope, usually starting around 66,57 and going around the large area. 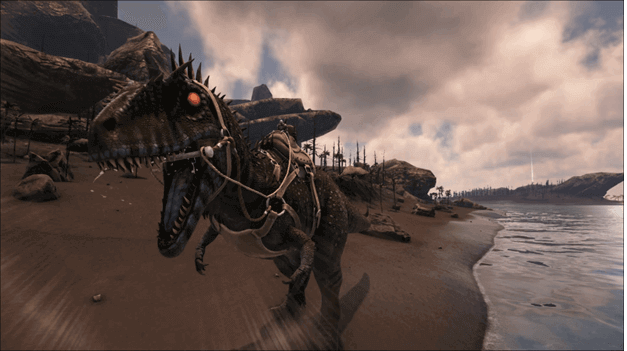 The Carcharodontosaurus is a tremendous foe and can be quite the game-changer when it comes to defending your base from raiders.

Although it may be hard to tame for some, the benefits outweigh the cons and the loss of any dinos as adding this beast to your army can change a lot.

While the Carcharodontosaurus may not deal as much damage as a Giga, it certainly has a larger health pool and more mobility and can do a lot more on its own.